Papandayan - The Beauty of Mother Nature, My Indonesia 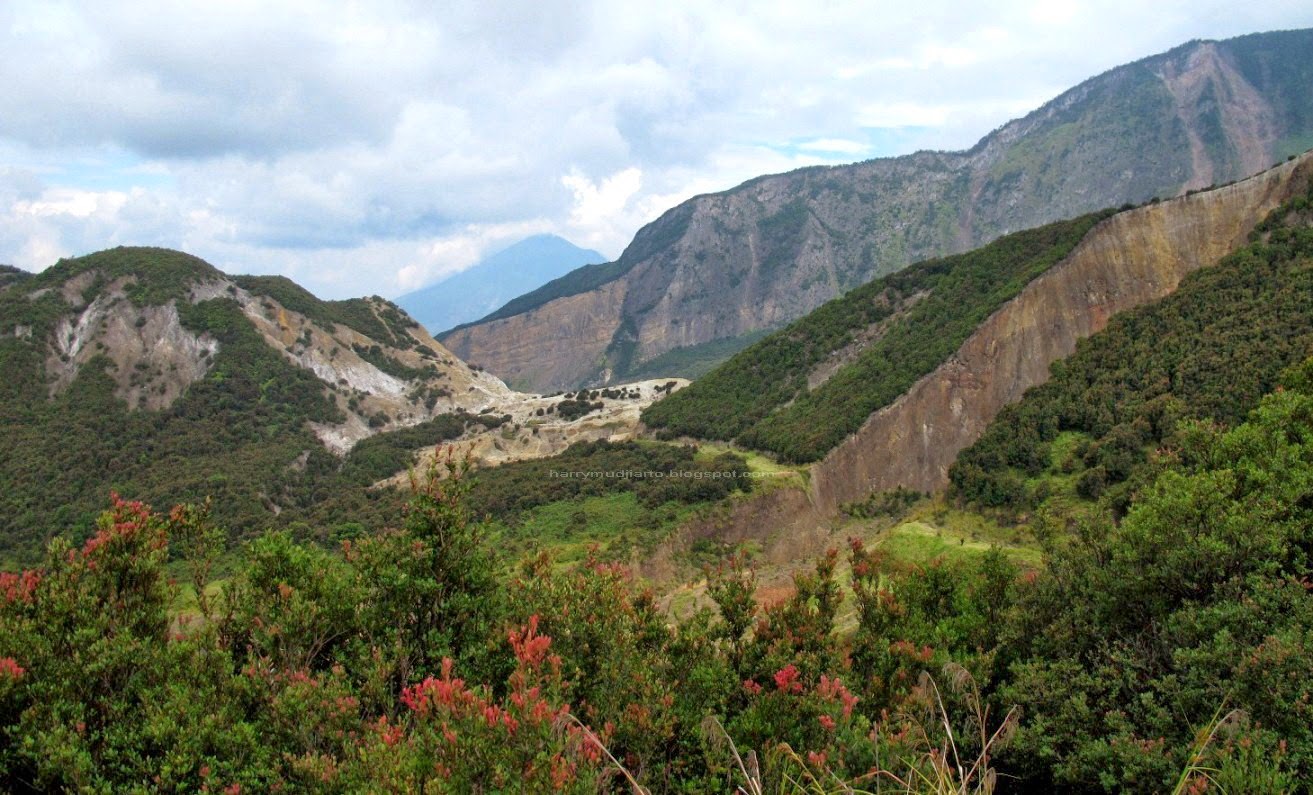 We sat down in little circle, between our tents, and took one of our raincoats as our carpet. Warmed in wool jacket, I looked at the faces in the circle. They looked so tired yet so happy and cheerful. I could see in those eyes that they still had strong enthusiasm of this tiring trip. I sipped my black coffee, with light taste of sweet, flowed run into my throat. A cup of hot black coffee, so dark and so perfect with its steam flew up, up and up, blended into curtain of mist which came passed our camping ground. We sat down in little circle, here on the plain of Seven Peak Mountain’s throne.

Jokes and random topics in our chat, definitely, warmed us up in weather which was getting chillier every second. The wind circling around us, blew stronger every second, eavesdropped every rumors that we talked about.

“Does anyone want some instant noodle?” the commander shouted and directly replied by everyone who heard it, with “Me, me, me.”
Well, I think instant soup noodle was the perfect snack in this chilly and windy weather.

Back to the early afternoon, we had walked, trekked and hiked the mountain and set the camps in plain. It called Pondok Saladah which was surrounded with weeds, trees and edelweiss bushes. Here we were, in Papandayan Mountain.

“One, two, three, … nine.” The Commander counted.
Sharp! At 10.30 pm we embarked the trip from the middle of downtown Jakarta to Garut City in West Java.

Around 8 hour we sat, fell asleep, chatted inside a mini bus that we rent. We have gently swung (to the hardcore one) by the road which was in bad condition, before we entered the only road which led us to Telaga Bodas.

Telaga Bodas, which means white lake in Sundanese, is a volcanic lake and part of Bodas Mountain. Telaga Bodas is also one of nature reserves in Indonesia. 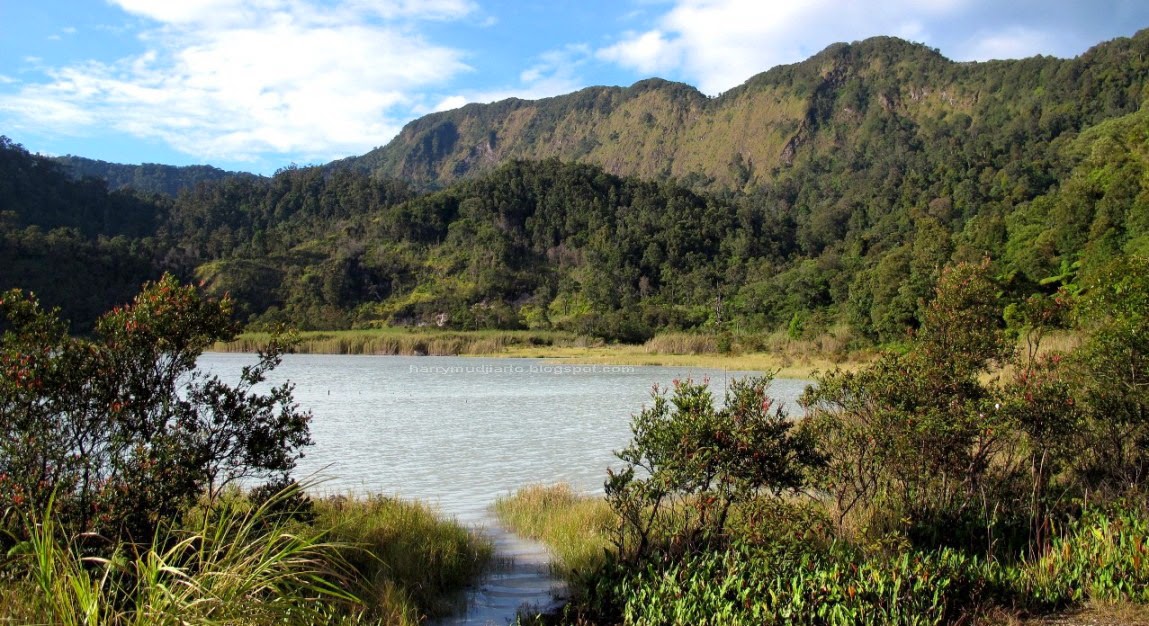 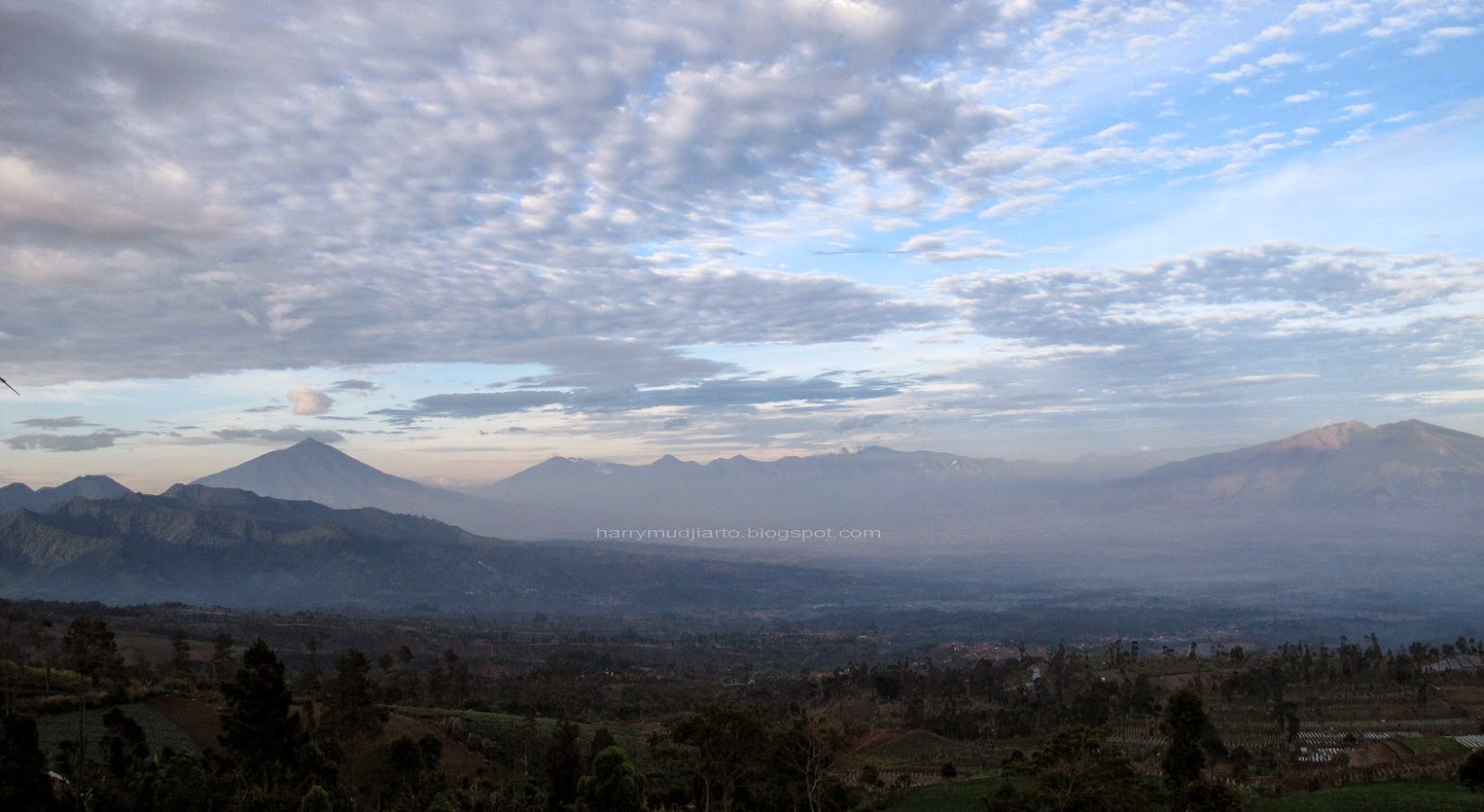 The lake was beautiful (with light smells of sulfur) but it didn't keep us long enough to stay there. We rushed straight to Papandayan Mountain area. 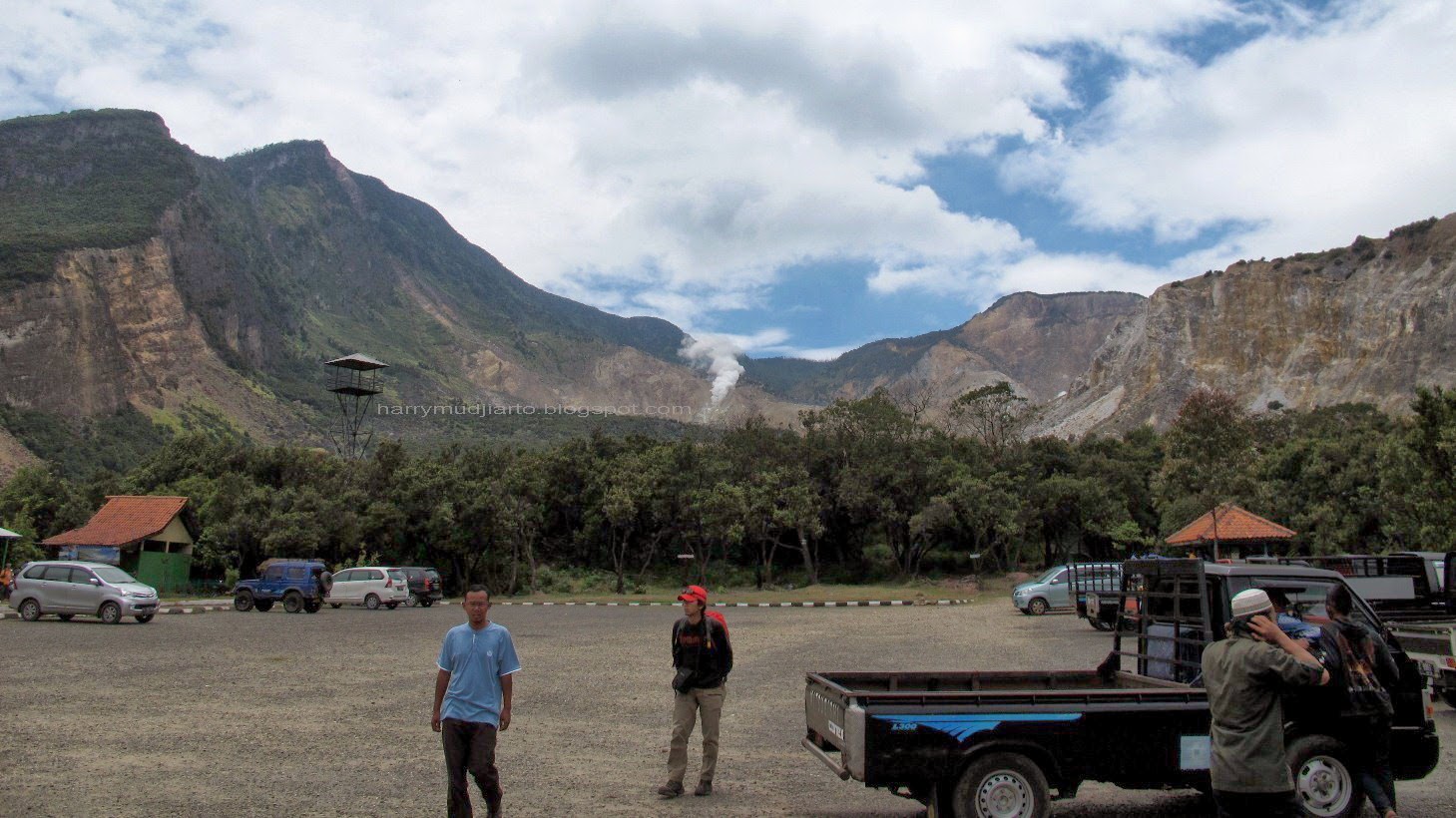 “Are you ready guys? If yes, go ahead, I’ll catch you up later. Egot will be your tracker.” The commander said. As mini group of chicks, we gathered around the tracker.

In a line, we started to trek cross the outside border of Papandayan Mountain, followed the path with Egot as the head of this line. The path led us near to couple craters of Papandayan, which are still active and exhaling sulfur. Everything looked so arid, where rocks and dust were everywhere and so dry even there were small lines of sulfur water flowing down to the valley. 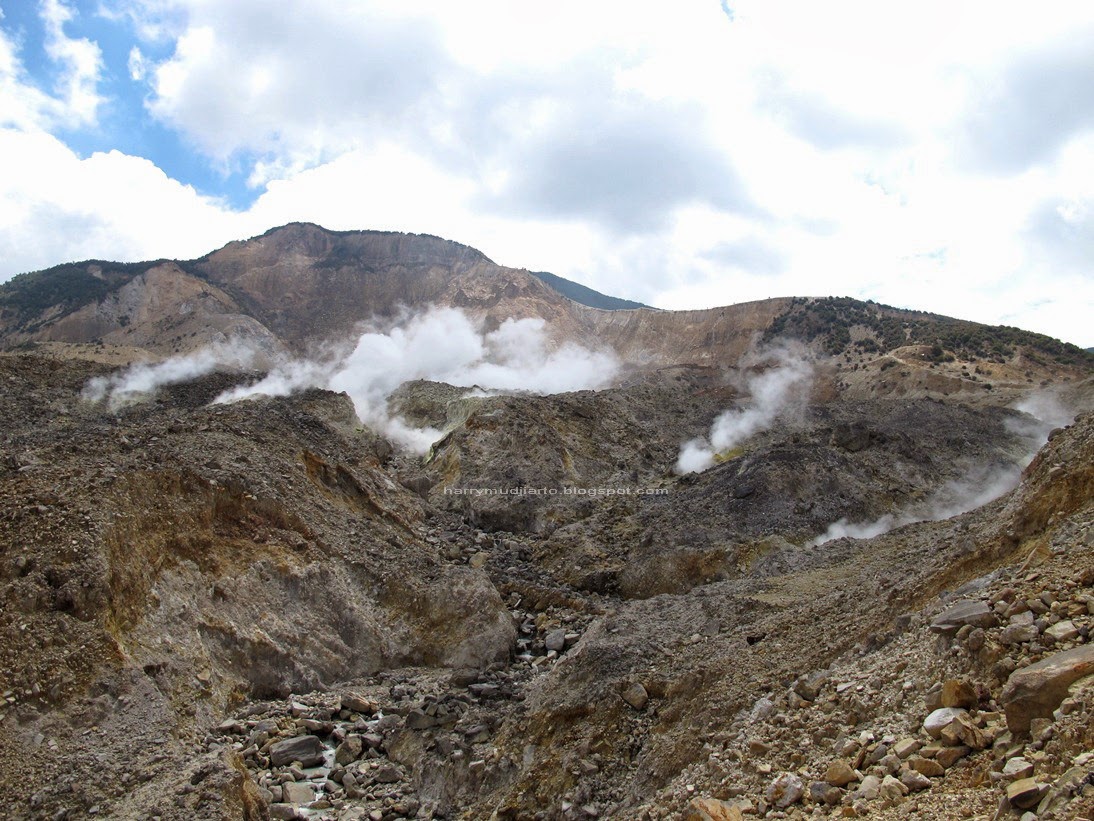 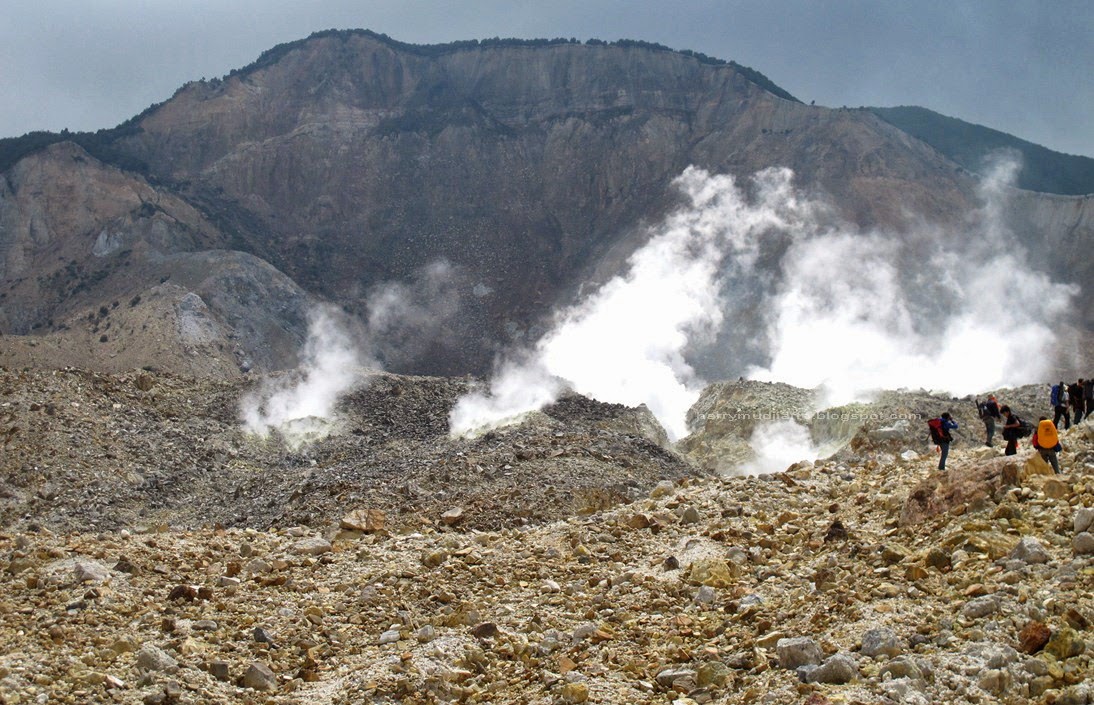 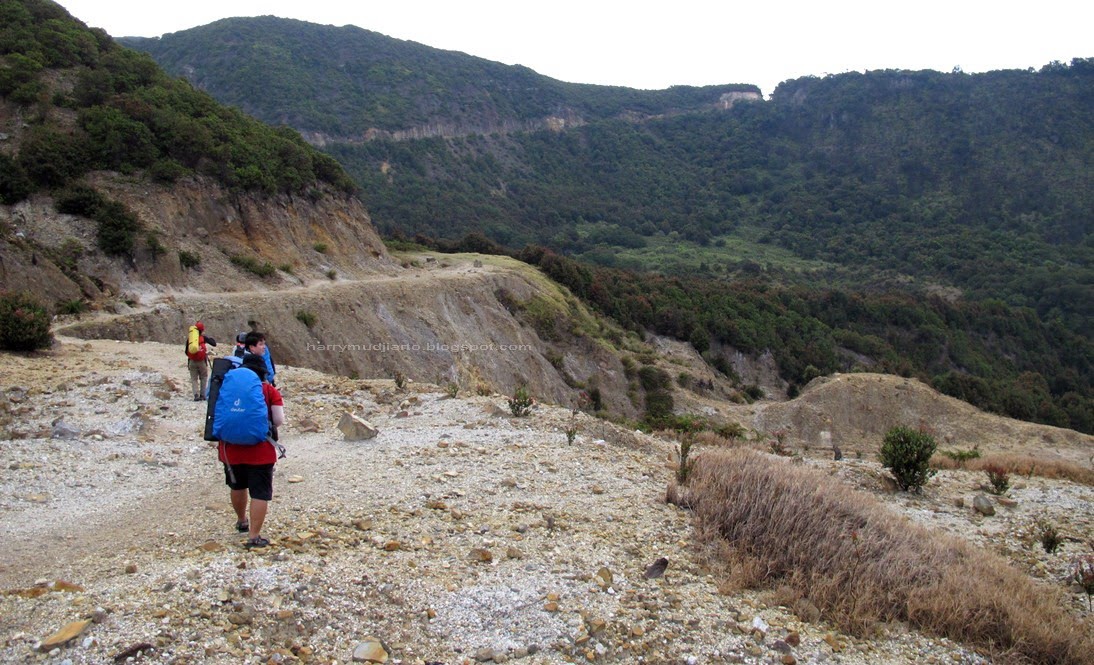 Half way to Pondok Saladah, we took a break for lunch (we should bring our food from the parking area) in a small plain with a gorgeous spectacular view. We ate our lunch with views of higher green hill and when we looked down from the edge of the plain, we saw a dusty valley, ornamented with rocks. I thought we did right to agree with Egot’s suggestion to avoid Dead Zone Track in our first day trek. 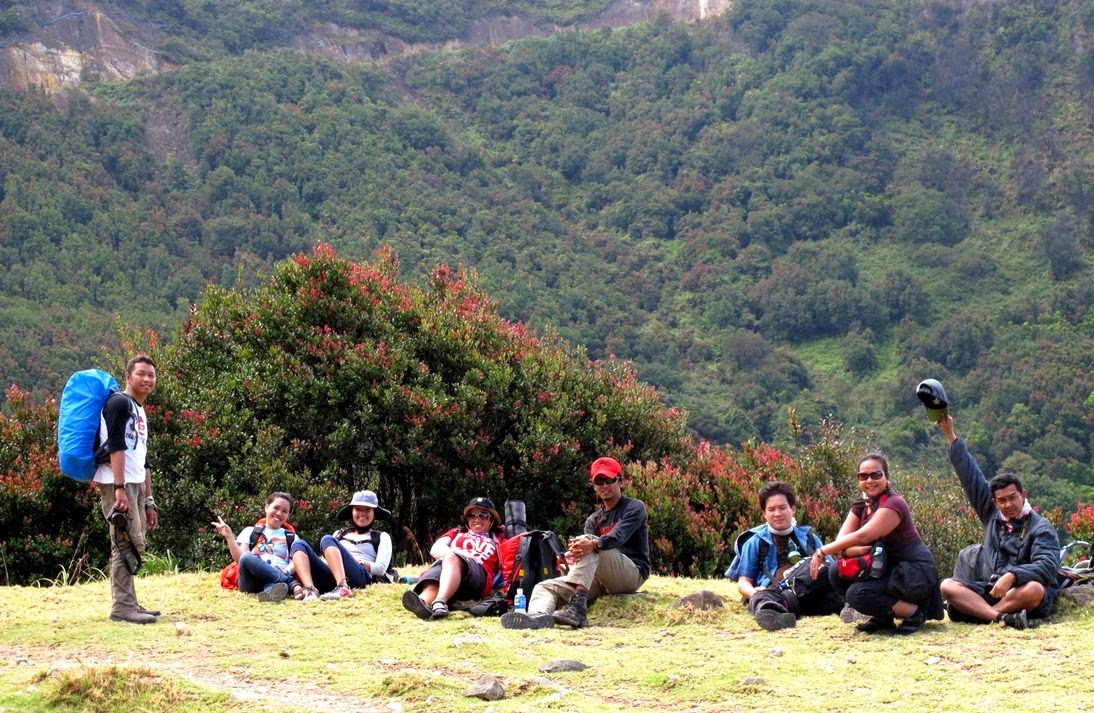 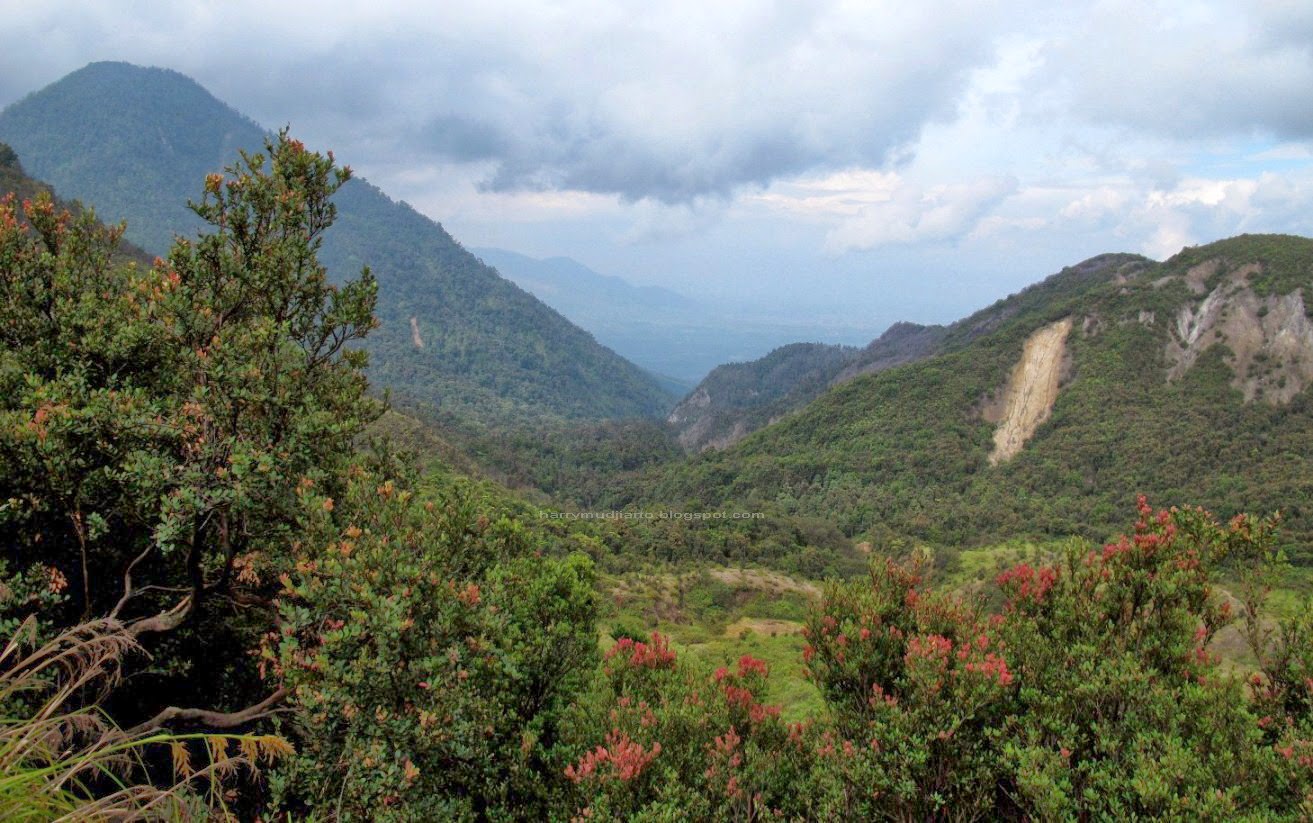 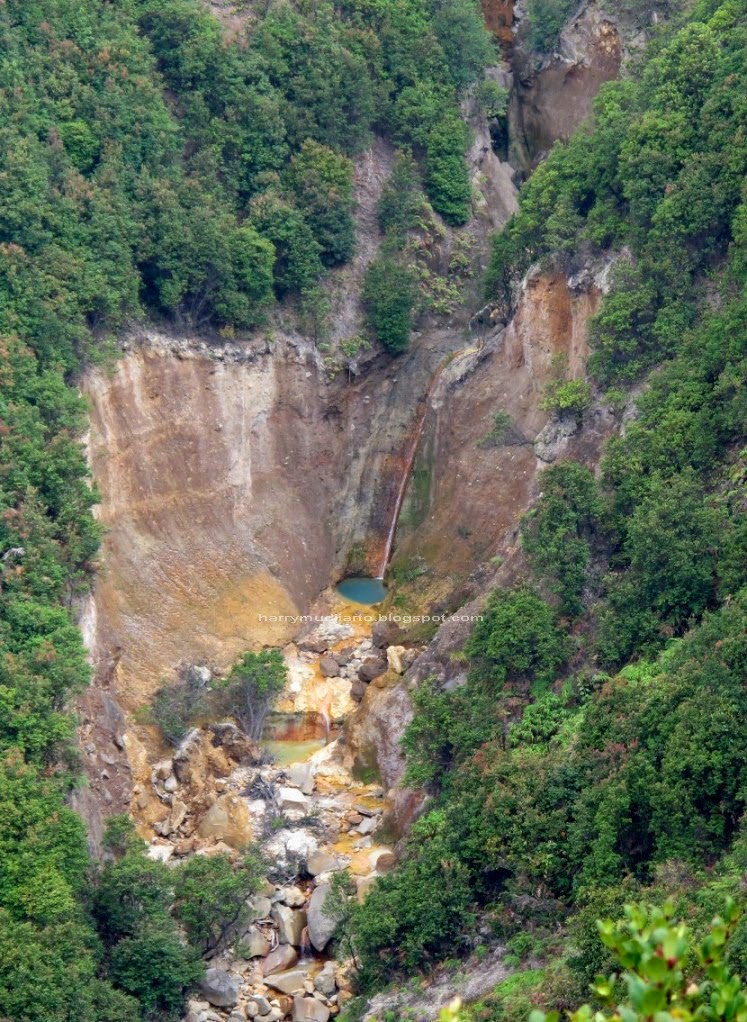 We continued our trekking, crossed the clumps of tree and bush, followed the winding path way up to the gap and had to face “Tanjakan Anjing” (Tanjakan means ascent and Anjing literally means dog which is also means bastard in slang Indonesian’s language). The ascent was short enough yet so hard with level of slope more than 45 degrees and gravelly, caused the road more slippery. The ascent owned its name “Anjing” (bastard) because most of the trekker cursed, while they climbed it. 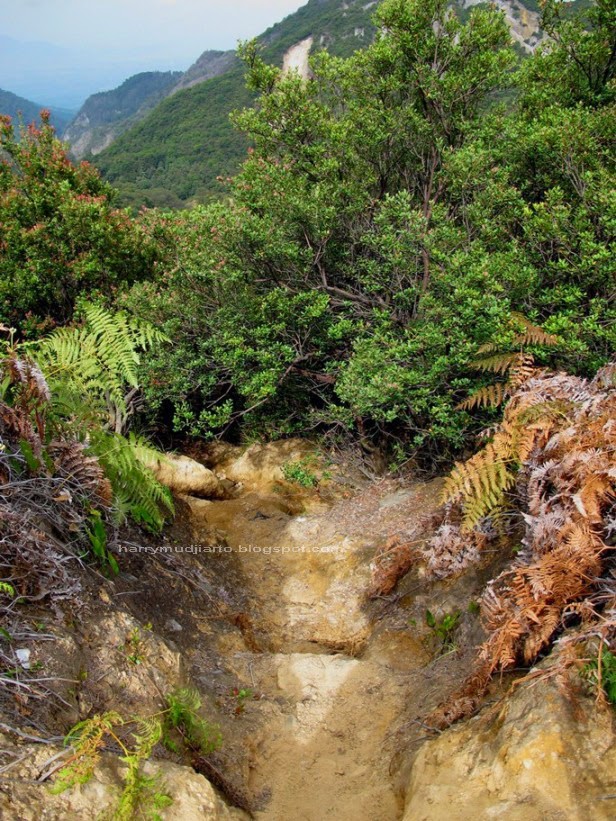 Tanjakan Anjing made us save our time for several minute and didn’t need to walk on circled path, which was more ramps yet more slippery than Tanjakan Anjing with gravel sands on the path.

The journey continued and finally we passed the gap and entered a plain. Our destination, Pondok Seladah, was around 30 minutes from there. Again, we had to pass the clumps of tree and bush to finally arrive at Pondok Saladah. A camping ground surrounded by mountains and edelweiss bushes. 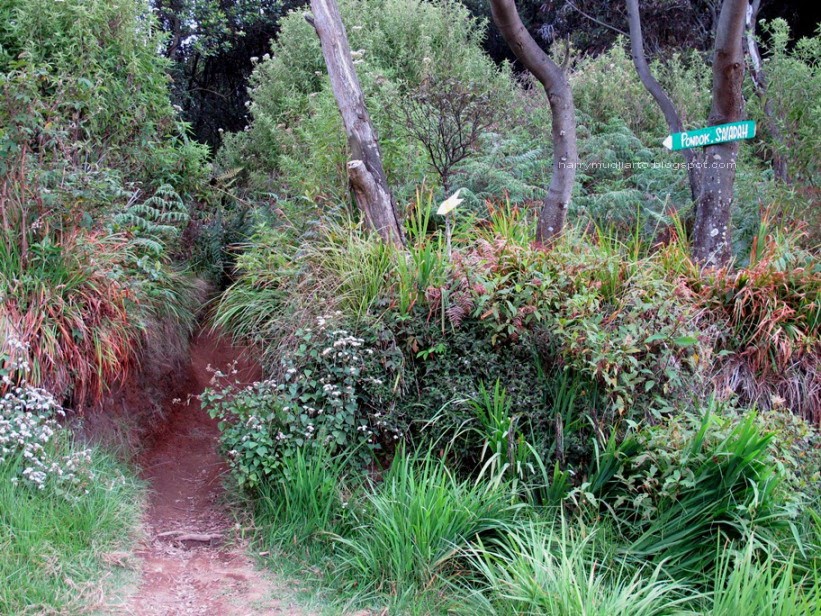 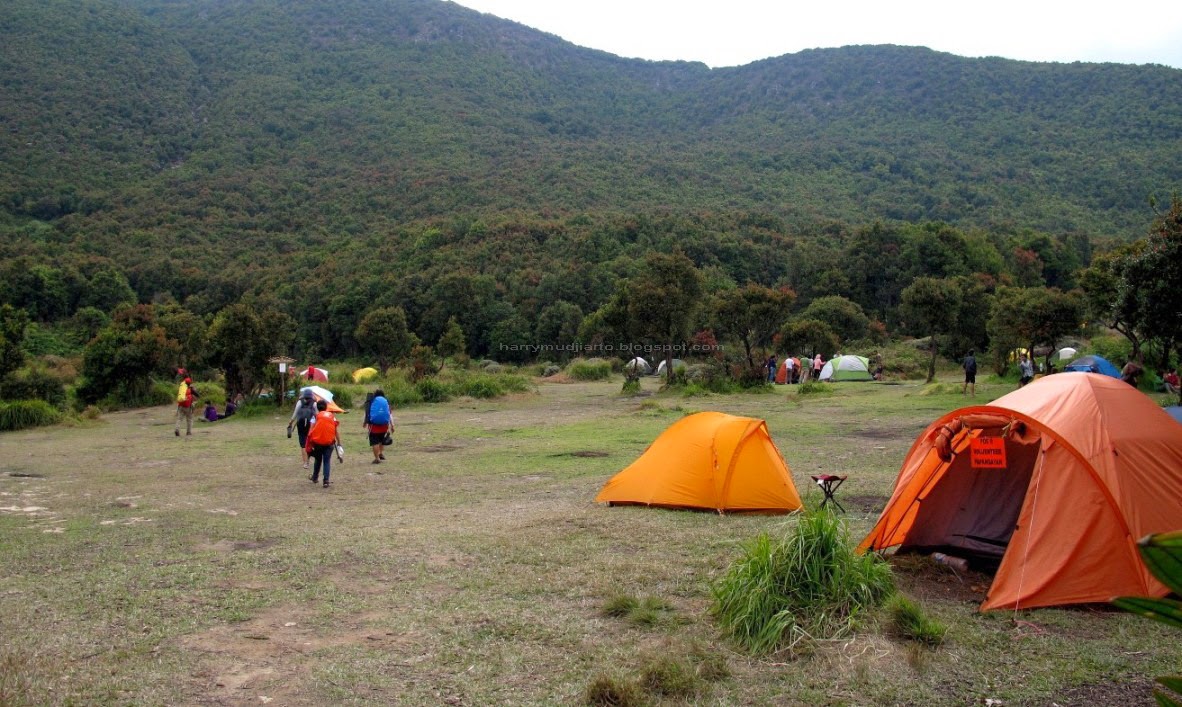 Set up a tent was not my specialties and instead of making the process worse, I and couple of friends decided to explore this camping group which was quite large.

We, said goodbye to the afternoon and the sun, welcomed the evening stars. The weather was getting chillier every minute of it. Unpacked the backpack and jacket, hat, gloves were all I need. For sure, hot beverages and instant noodle soup were the five stars services.

Did nothing and ate everything were all we were doing while sitting around the bonfire.

***
“Grokkkk Grokkkk” what an annoying sound! I woke up with “What the hell is that noise!” in my mind and found out that the observer who slept beside me was the one who own responsibilities of that stereo noise.

“Well it’s time to wake up anyway.” I thought and decided to come out from the warmth of my sleeping bag and lifted it out. I walked out from the tent and welcomed by the freaking chilly weather.
“Grab your plate and eat this noodle soup.” The chef said to me, who directly grabbed my plate and sat peacefully nearby the chef.

The sky was so dark, well it was 4 am. The area was still misty. I sat down and had been enjoying my noodle soup in front of (almost) dead bonfire while its ember struggled to burn.

***
“Okay, ready” the commander asked to us and we started the morning trekking to Hutan Mati (hutan means wood, mati means dead and hutan mati means dead wood/zone). Why so early? If we were lucky, we would watch a great sunrise from the edge of The Dead Zone. Dead zone existed because the area is a pyroclastic flow line, when Papandayan Mountain was erupted. The Mountain is still active and was erupted couple times since 1772.

Less than thirty minutes walked and we entered The Dead Zone. I was so mesmerized by the view of this area. The area was literally dead and arid yet so gloomy beautiful. It was misty and mystic; hide its own mystery, behind hundreds of dead black trees. This was what people called Beauty of The Dead. 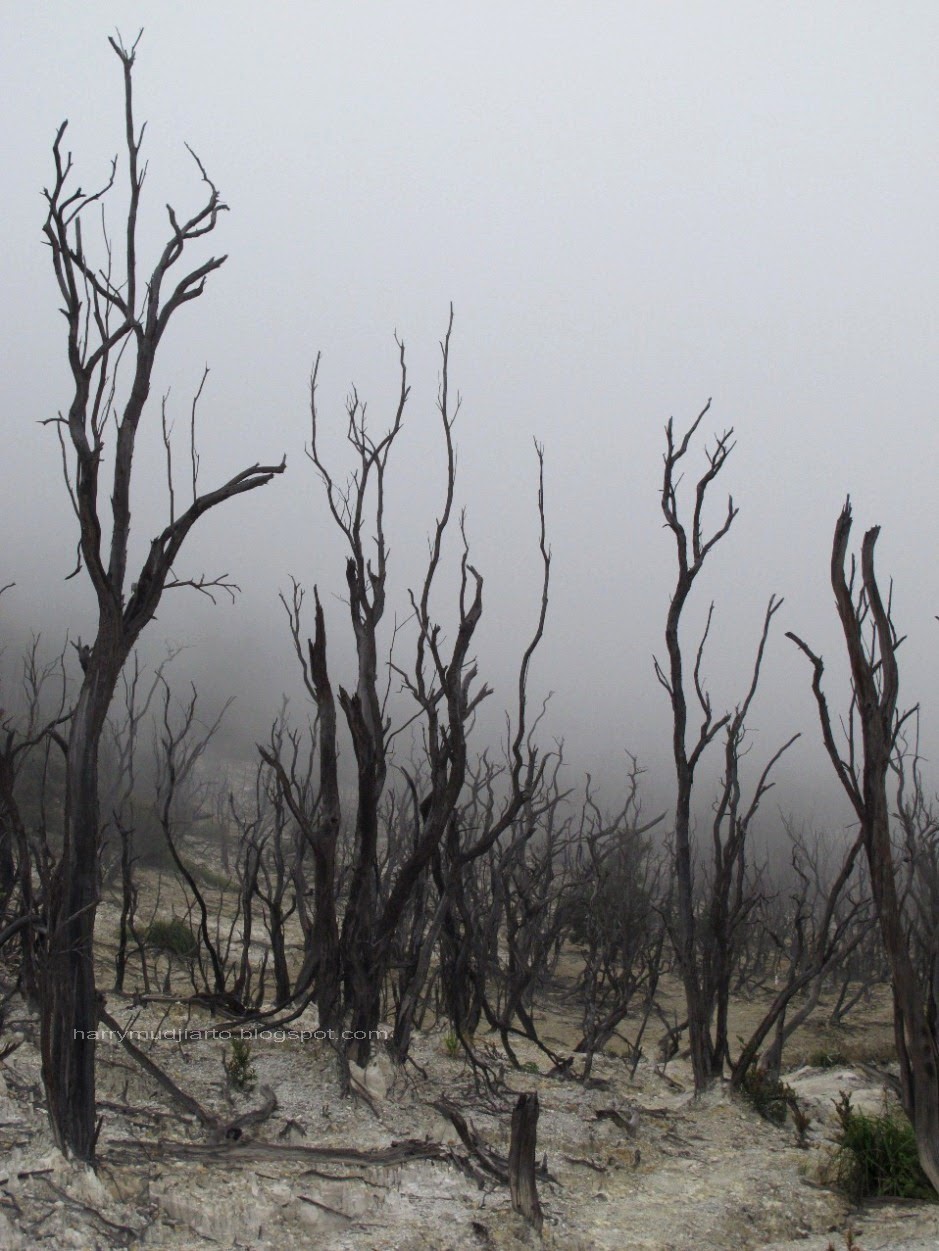 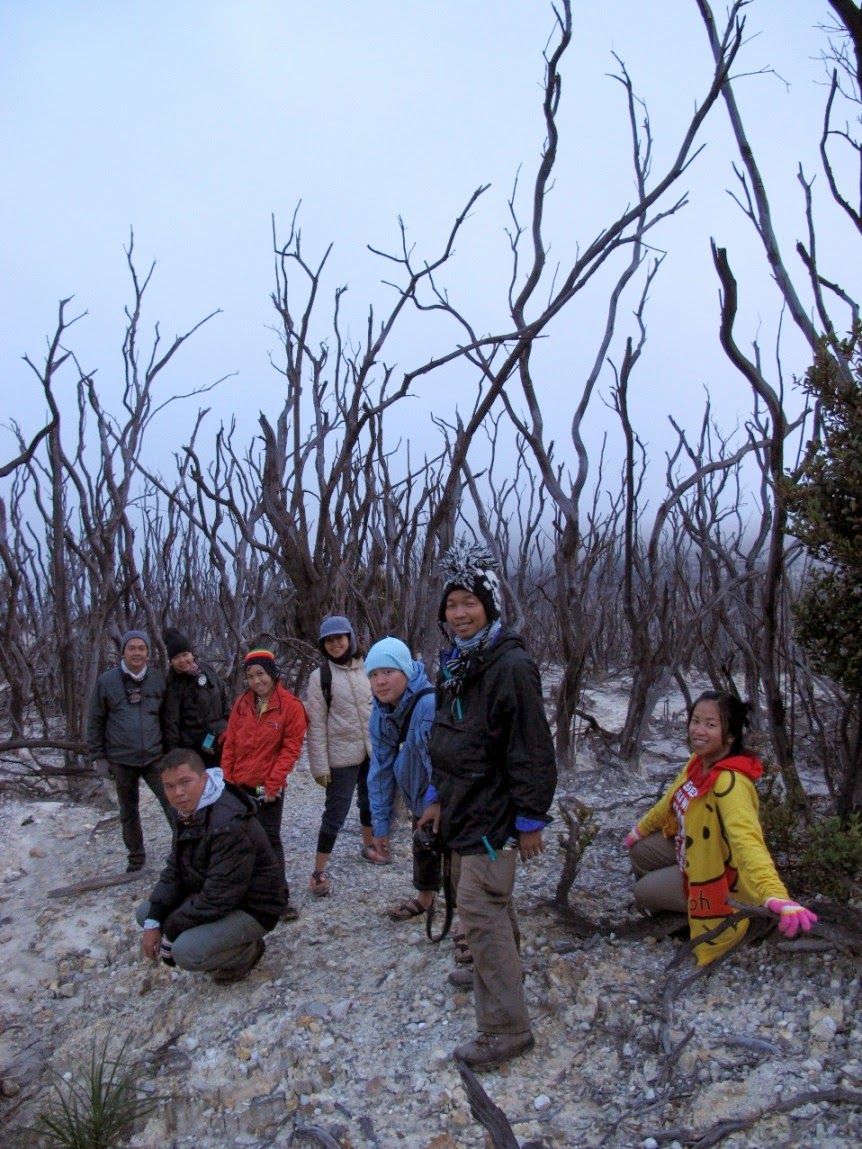 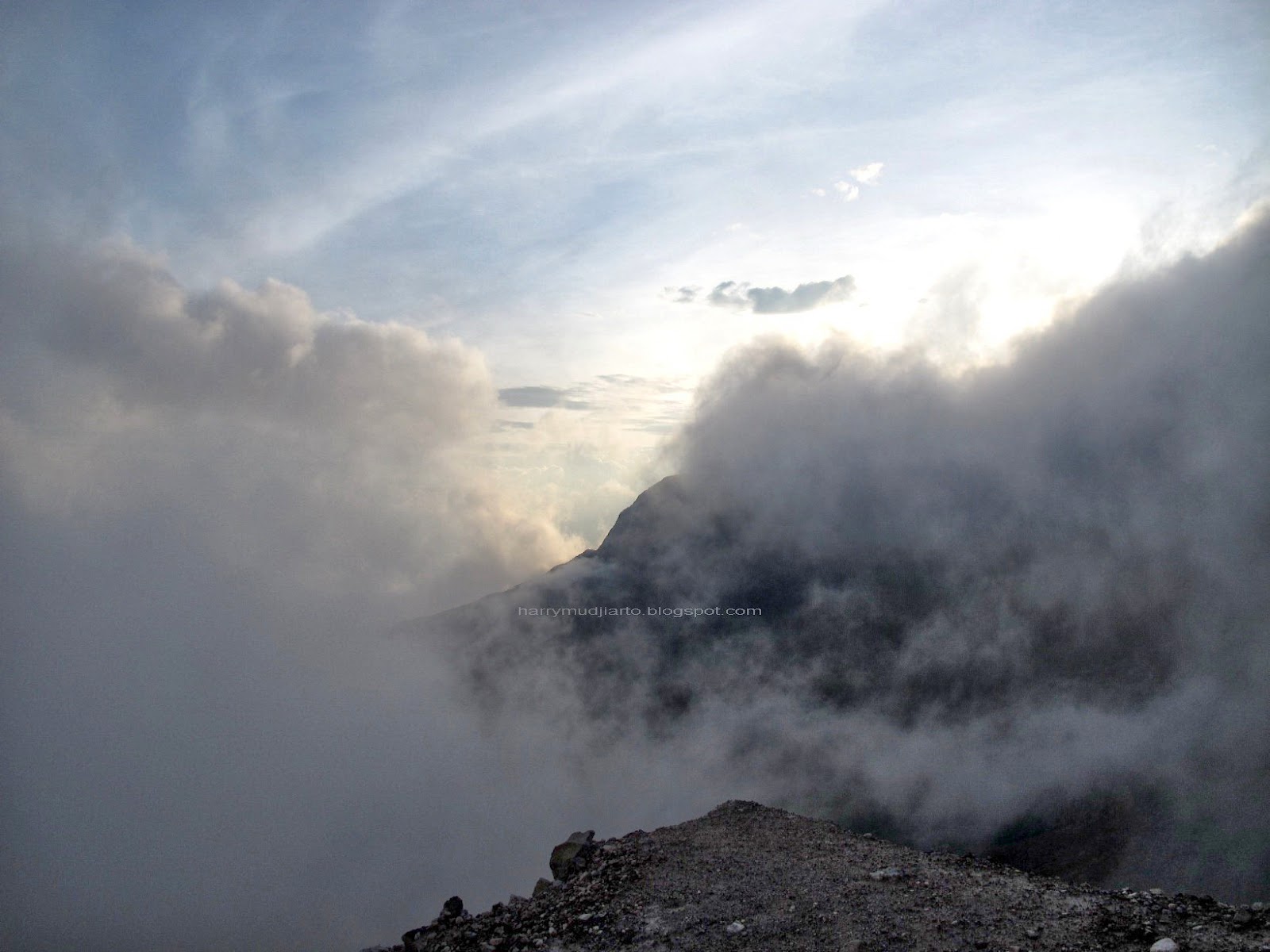 Stood at the center of Tegal Alun, I felt so small, intimidated by the mountains which were look like embrace this small plain. Mesmerized by His creations, here in my country; my homeland; my Indonesia. 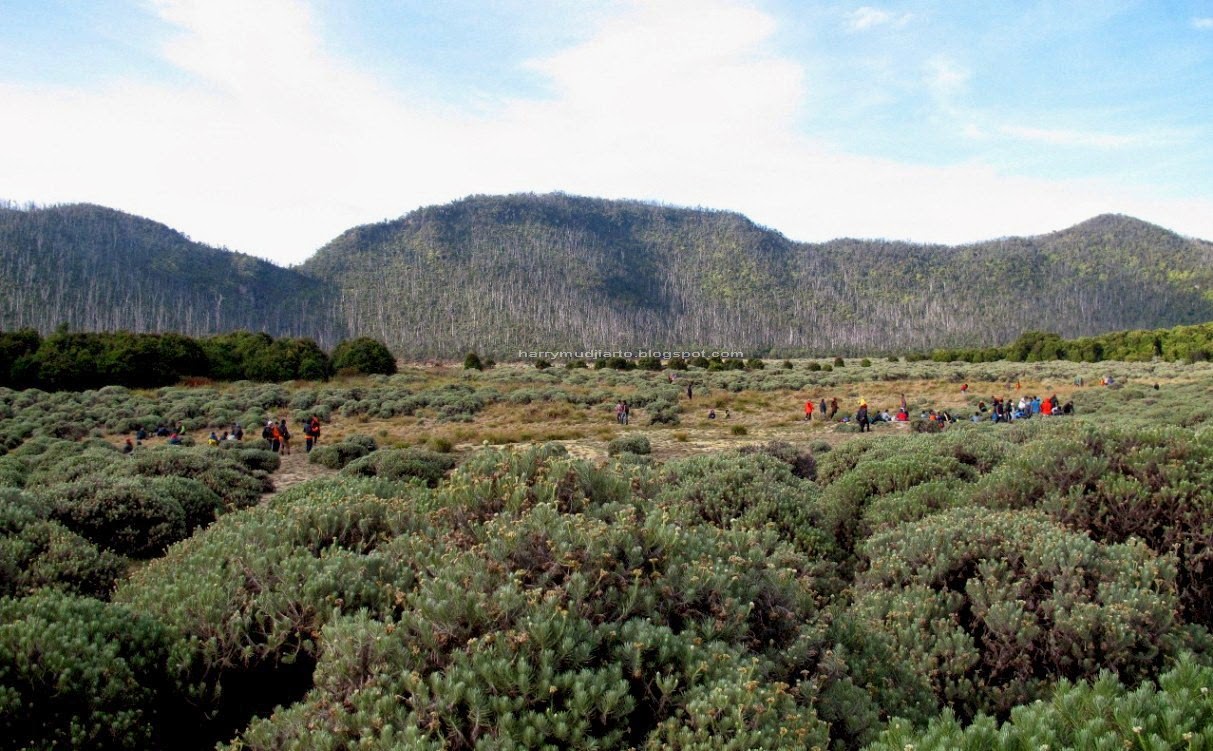 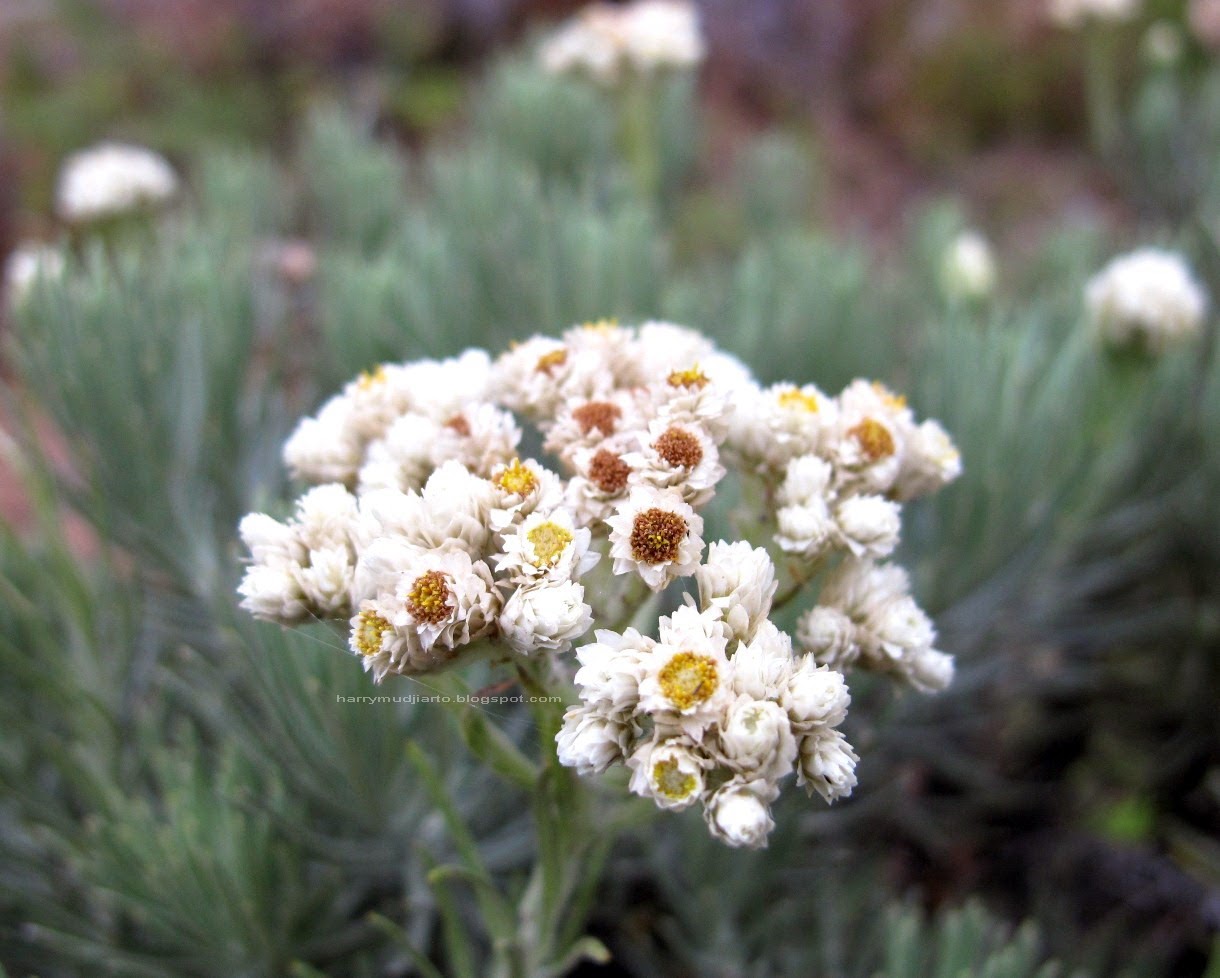 I felt so peaceful, I felt so relax. The strong wind blew to my body; reminded me of the problems that have been hitting me in my life. The sweat of this trekking and hiking remind me of the effort that I have devoted. Hundreds of Edelweiss in many bushes, survived against the strong wind and chilly weather, reminded me that in this life I am one of the edelweiss who survived and kept alive in my own happiness.
In my point of view, all of the ascents, dusts, sweats, winds and chill weather made me could stand at this Tegal Alun and enjoyed the beauty and the grace of it. So I guess, yes I have to be ready to face all the problems in my life to reach the beauty of the achievement.

Yeah, I think I am ready and start over to reach higher. 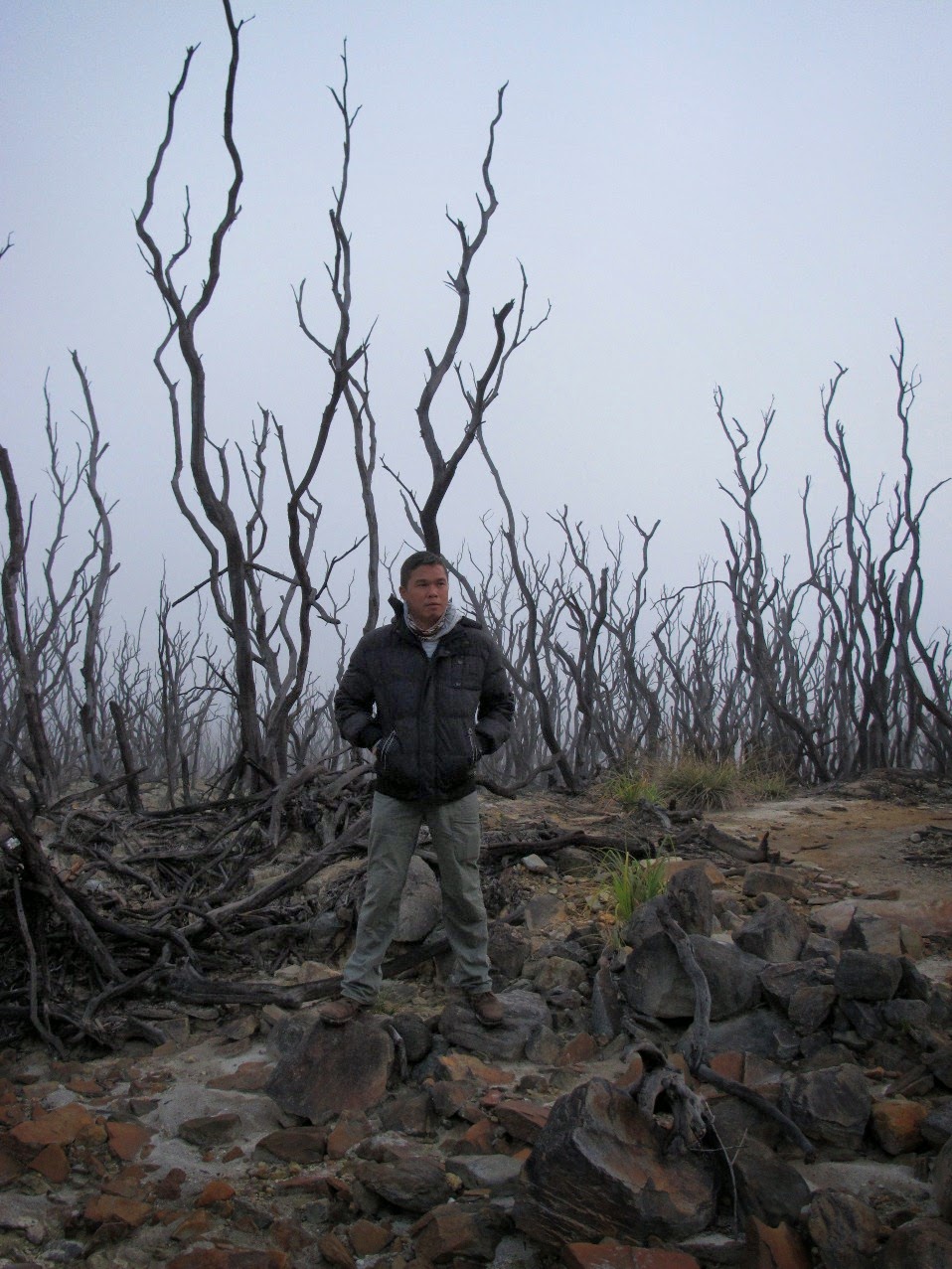 Special thanks to AT for my English translation review