The Taste of West Sumatera - Indonesia 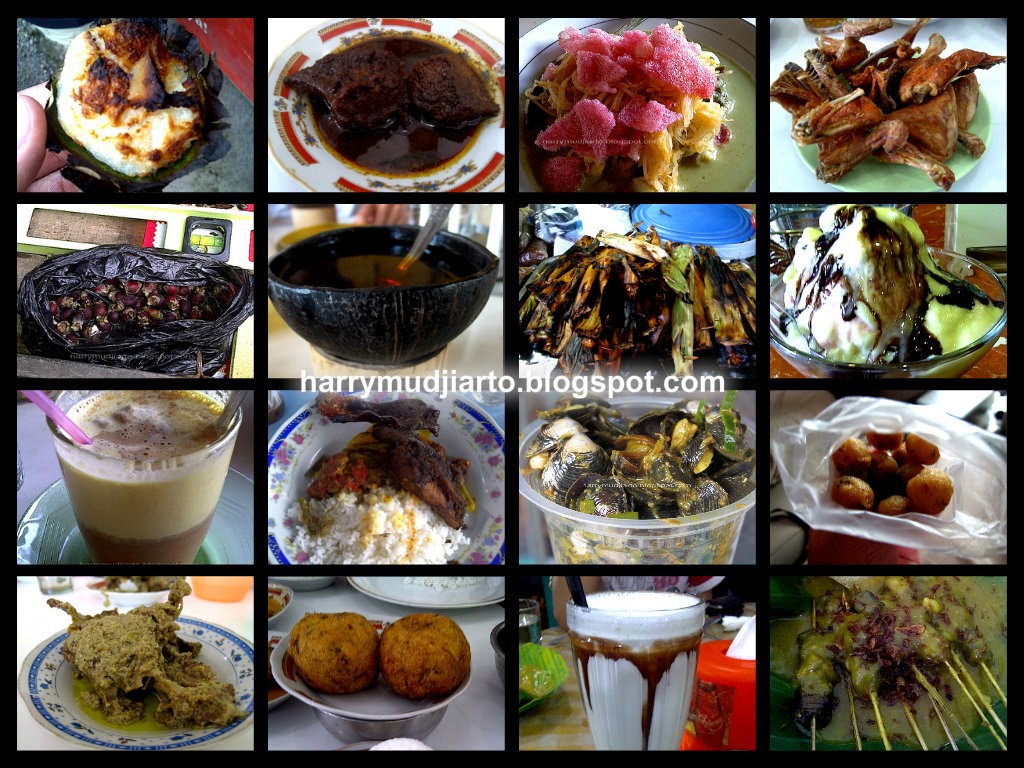 “Welcome to Padang and West Sumatera.” Bayu, the local tour guide welcomed us.
*handshakes and how are you thingy*
“Bla bla bla …” we talked to each other.
“Okay, we have to adjust to the schedule a little bit and now we are heading to Anai Valley.” Bayu said to us.
“Nope.” I replied.
“Harry, I think we have to go to Anai Valley first to avoid bad traffic jam.” Bayu answered.
“No before we find something to eat, I'm starving to dead.

3 days 2 nights in West Sumatera, in our road trip, crossing this province and indeed the culinary is one of many unique and delicious culinaries in Indonesia. The Cuisines, Beverages and Snacks of Minangkabau. 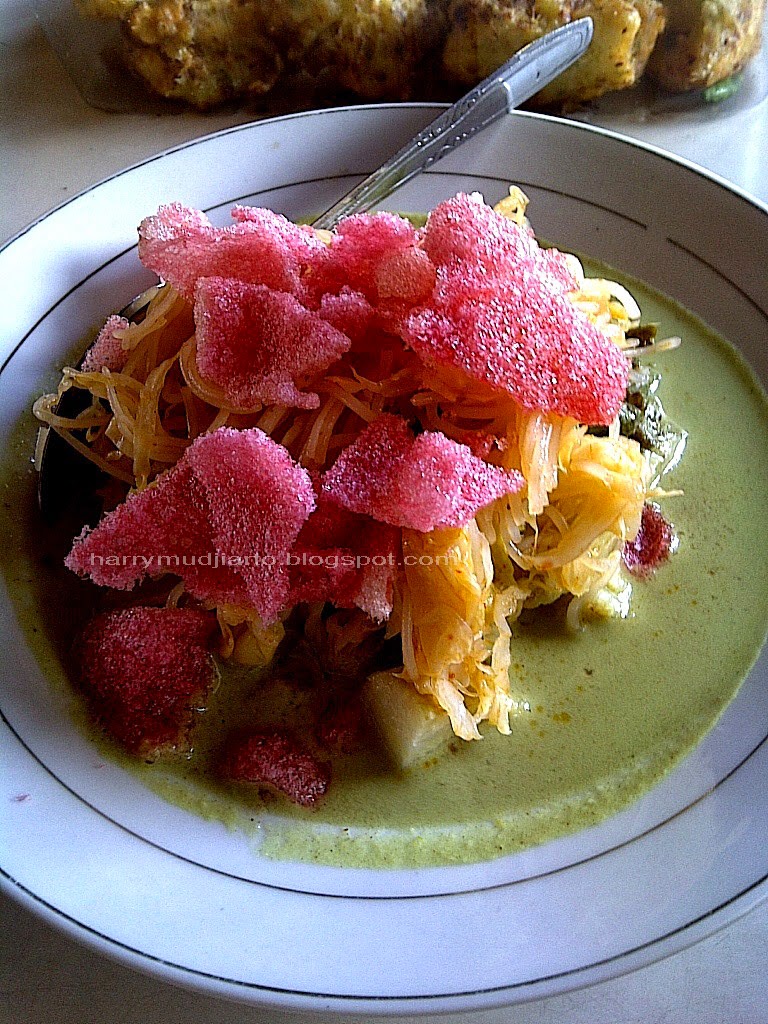 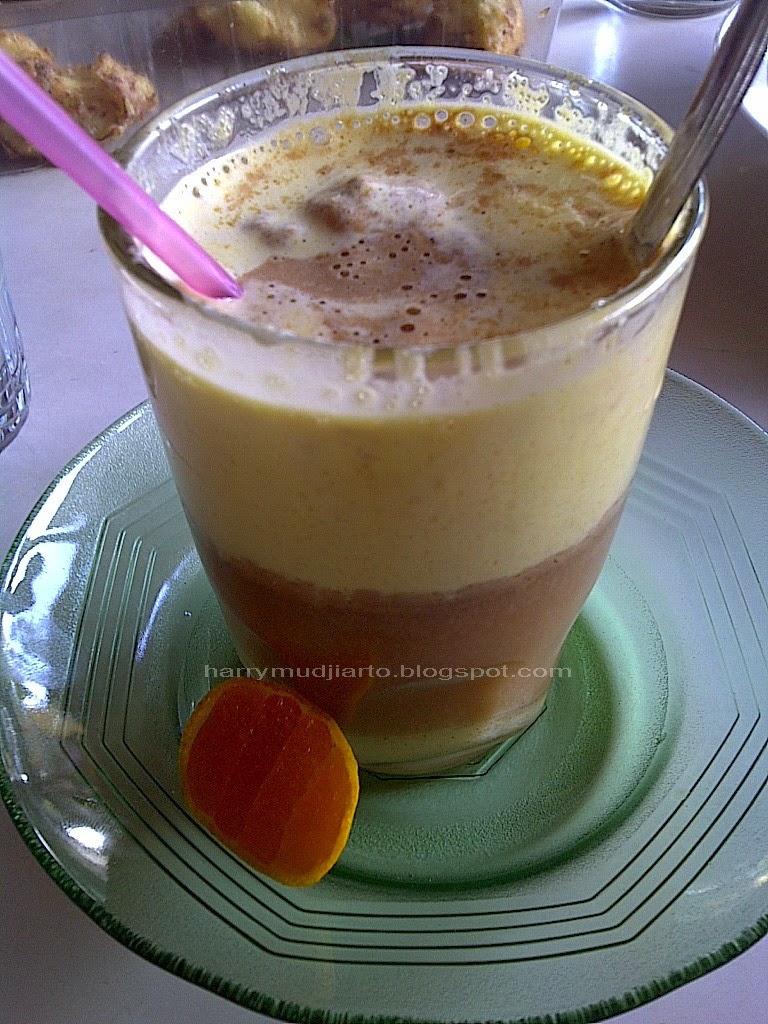 It's called SINGGANG BAKAR or Bika. Singgang bakar is a snack (usually served in mini size) and we claimed it as the best snack in West Sumatera. The main ingredient of this snack is coconut. It taste like Wingko Babat (the fomous snack from Semarang – Central Java) but more smoky, because its dough placed in some leaf and roasted.
Taste: salty, savory, smoky. 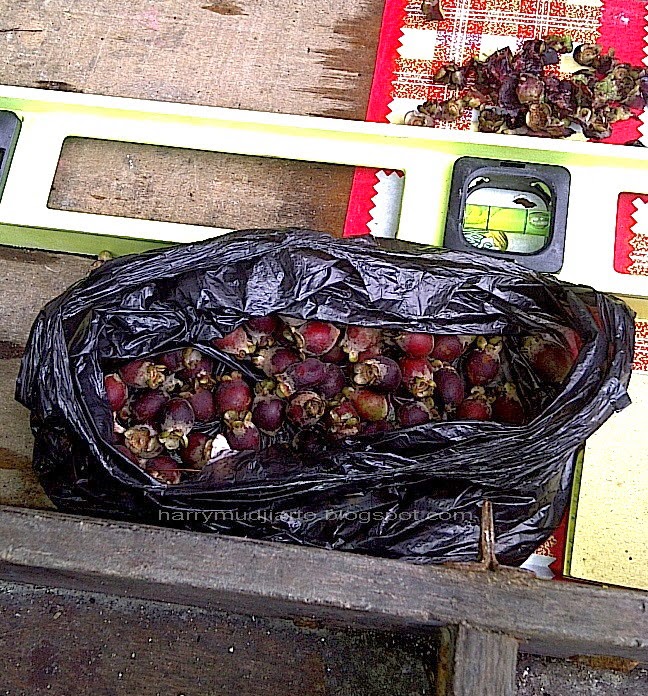 It's called KARAMUNTING. Karamunting is a tiny fruit which (told) grows only in Anai Valley area. We can find this fruit for sale at Anai Waterfall. This tiny fruit has soft texture and less meaty fruit.
Taste: fresh, tasteless, less sweet.

It's called Sate Padang MAK SYUKUR. This beef (or beef’s offal) satay is one of the famous culinary icons of West Sumatera. Actually it’s so famous, so we can find its stores in Jakarta. Sate Padang means satay from Padang. Instead of using peanut sauce or Indonesian sweet soy sauce (like most of satay) Sate Padang used some yellow brown gravy (usually served with beef’s skin chips or chili cassava chips).
Taste: meaty, salty, savory. 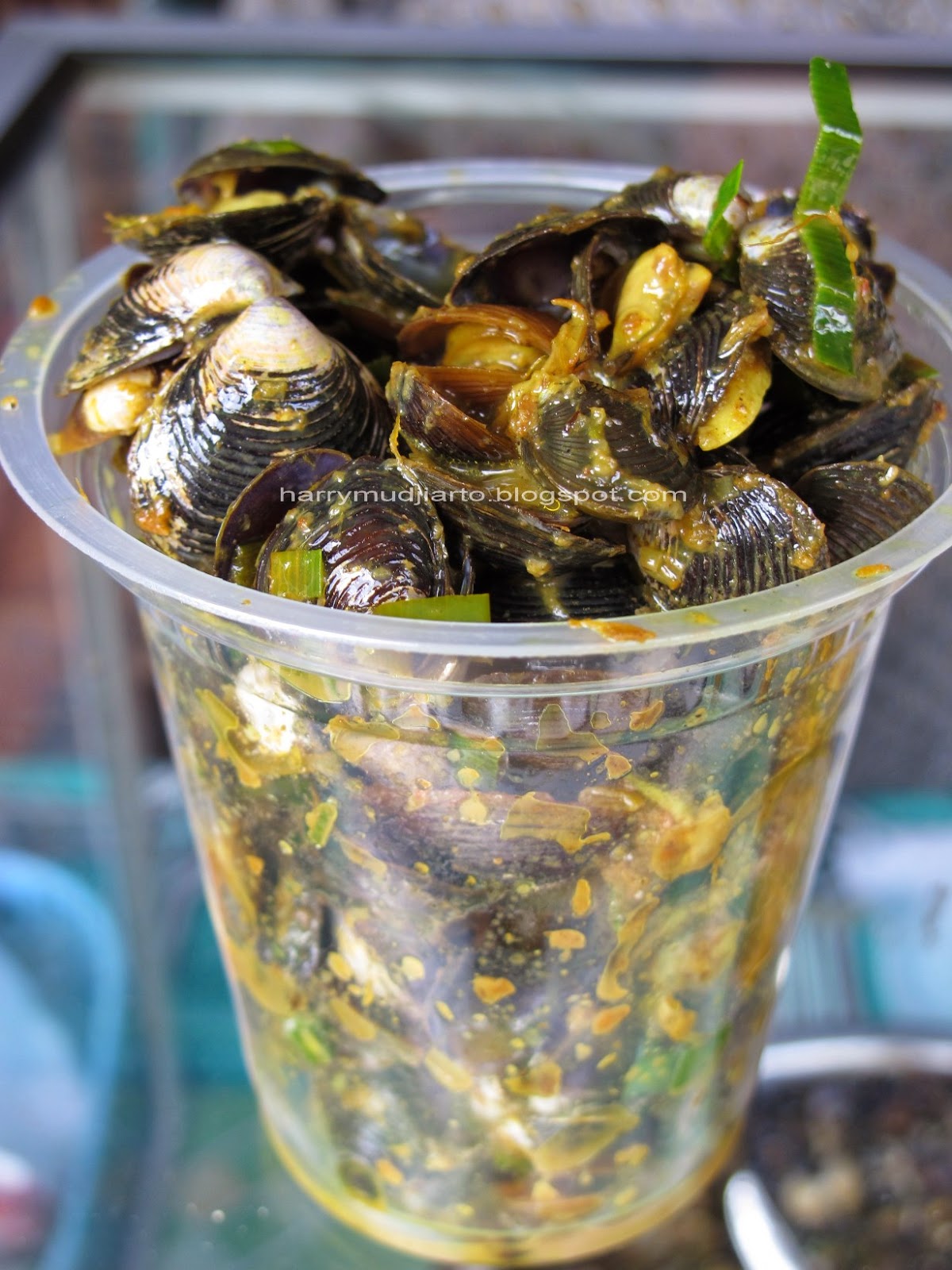 It's called PENSI. Pensi is a portion of stir-fried mussels. We bought a portion of Pensi at The Great Wall of Koto Gadang (nearby wooden suspension bridge) and we loved it. Unfortunately we didn’t like Maninjau Lake’s Pensi because it had less spices and looks like it was only steamed.
Taste: savory, salty, spicy (Great Wall’s Pensi).
Taste: tasteless, fishy, raw (Maninjau’s Pensi).

It's called NASI KAPAU. This dish is the famous culinary icon of Bukittinggi City (and West Sumatera generally). You can only find literally Nasi Kapau in Bukittinggi (The famous tents located at Pasar Ateh – local traditional market). Generally Nasi Kapau has a similar variance of menu and taste to Nasi Padang but Nasi Kapau has a unique way to sell the dish. Usually the seller sits in some small stage and surrounded by the menus. They (seller) used a one meter wooden spoon to take the menu that we are ordered. Nasi Kapau is a portion of steamed rice with many choices of vegetables and meats (chicken, beef, etc) and its unique menu: fried rendang sweet potato.
Taste: salty, (sometimes) hot, spicy, savory, sweet. 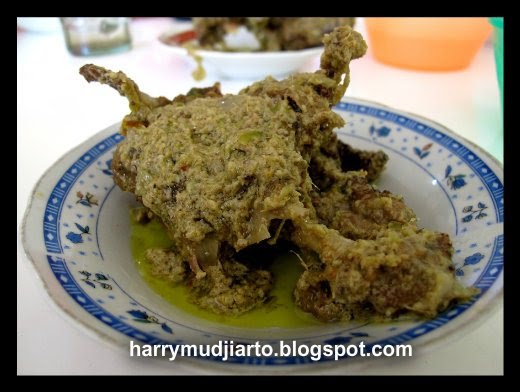 It's called ITIAK LADO IJO. For us, Itiak Lado Ijo is best of the best culinary in West Sumatera (especially in Bukittinggi City area). Itiak means duck, Lado Ijo means green chili. This dish is not as hot as it looks. The duck was well cooked, so tender with the aroma of many spices, yet we still can taste the original taste of duck’s meat. It's served with steamed rice. Indeed, we carved more and more.
Taste: heaven hahaha. No seriously, taste: so spicy, salty, savory.

It's called KAWA DAUN. This hot beverage is kind of coffee but made from dry coffee leaves. The color and the texture is more like black tea but it tastes like very light coffee. The coffee leaves were dried and stir-fired, then boiled in hot water (usually served with fried platters).
Taste: mixed of tea and coffee. 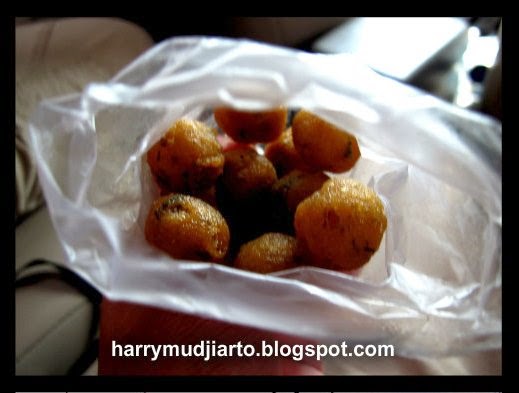 It's called SALA LAUAK. Sala Lauak is a deep fried tiny fish cake. This snack is made from flour, seasoning and salty dried baby fish which tastes like anchovy (we called it as teri fish) or baby shrimp (we called it rebon).
Taste: savory, salty.

It's called RANUAK. Ranuak is a steamed fish cake, made from hundreds of mini fishes which only live in Maninjau Lake. In Java, we call steamed fish cake as pepes (wrapped in banana leaf). Ranuak should be grilled first before it can be served. The texture is less like Surabaya’s fish cake (made from milkfish). We found that ranuak had different taste and texture, depend on the chef.
Taste: savory, salty. 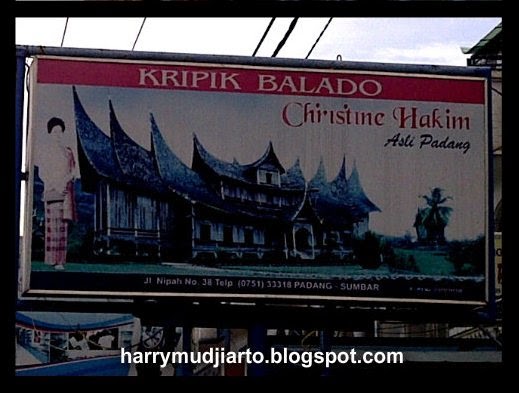 It's called CHRISTINE HAKIM Shop. Christine Hakim Shop is the famous shop which sell Balado Cassava Chips (Balado is chili sauce) and other snacks of Padang City, like: Beras Rendang. Beras Rendang is a traditional Padang’s cookies which is moist and (I describe as) powdery yet sweet and has texture like yangko (traditional cookies from Yogyakarta).
Taste, Balado Chips: savory, sweet, hot (available from cassava and potato).
Taste, Beras Rendang: sweet. 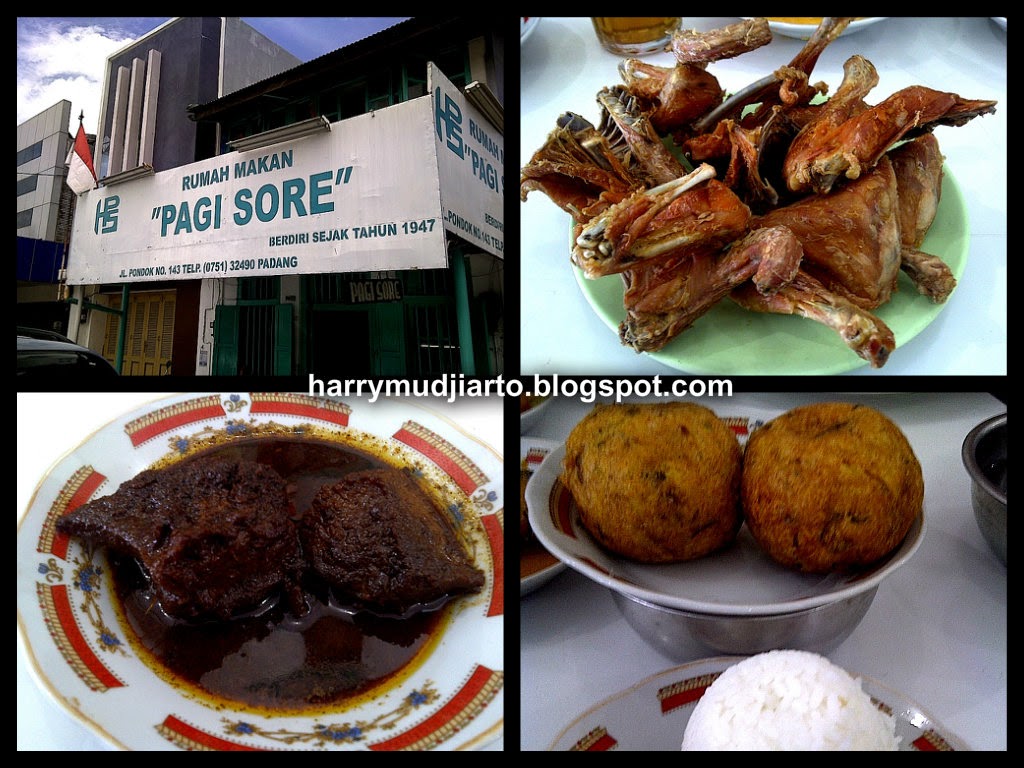 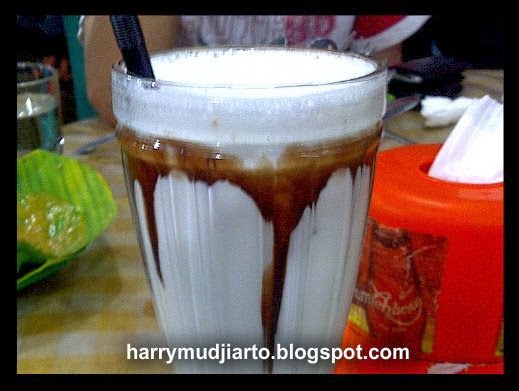 It's called Pinang Juice. Pinang juice is a juice made from betel palm. It's served as a fresh juice and with whipped egg yolk. The local said to me that the drink could gain your stamina in sex haha. It has white color and left bitterness in our tongue after we swallowed the juice.
Taste: milky, sweet, little bit bitter. 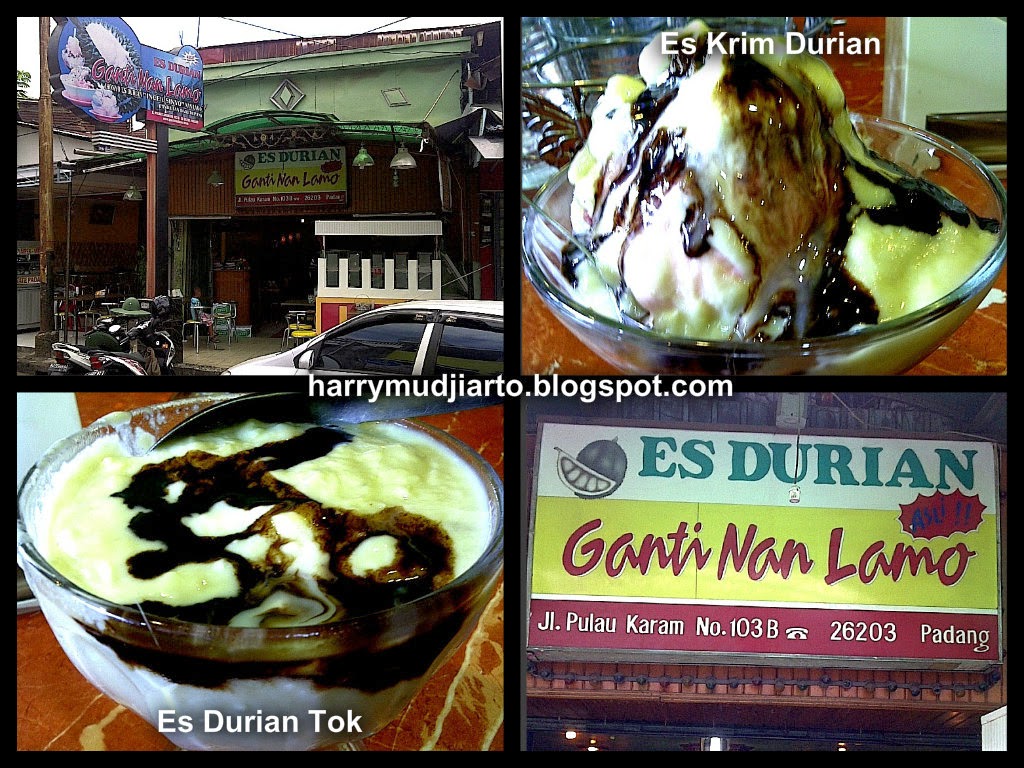 Es Durian GANTI NAN LAMO located in Jalan Pulau Karam no 103B (0751-26203) Padang and serves many kind of deserts from Durian Fruit. I didn’t see any kind of fresh durian fruit but Ganti Nan Lamo serve durian paste/cream/sauce. Don’t get it wrong, the durian paste/sauce/cream is made from fresh durian and tastes so good.
Taste: sweet, creamy.

Indeed, this article only covered a small part of West Sumatera’s culinary. Next time shall we?

Special thanks to AT for my English translation review
Posted by harry mdj at 3:37 PM