I said “Hello, how do you do?” to the land of South Sulawesi 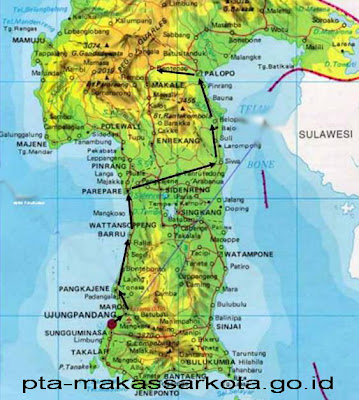 Lovely morning, the sun was so bright, the sky was so blue with white tinted spots of the clouds, and for the first time I scratched the land called Sulawesi with my footsteps.

My dream finally came true after a year of doubts to visit Sulawesi, even only in South Sulawesi. Now I’m here, standing in front of Hasanuddin International Airport main gate, welcomed by dozen of shouts from taxi drivers.

The first ever of my journey in South Sulawesi would be a road trip from Makassar (Ujungpandang) city, long way up to Palopo and Tana Toraja then back again to Makassar. Joining me were my two best friends, who have been my road trip buddies since couple years back to 2003.
First thing to do was visiting couples landmarks in Makassar. The airport is around 1-hour drive to the downtown of Makassar. Our first destination was Mandala Monument which was closed, leaving us to take pictures from outside the fence.

Next destination was the famous landmark of Makassar, Losari Beach, which is a famous place among tourists and locals to hangout, especially in the evening and Sunday morning when the area is forbidden for any vehicle thus becoming Sunday Market. The landscape of Losari beach was under construction for expansion and I think it would be more comfy and nicer when the construction is completed.
Just hundreds meter from Losari Beach stands a Colonial Fort called Fort Rotterdam. Built in around 1670 by The Dutch in shape of turtle, which represents a strong turtle’s shell. There are dozen of buildings standing in every wing of the area with a church as its center point. 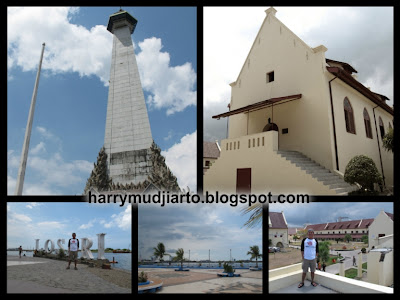 Lunch Time! YAY! We headed to Apong Restaurant in Diponegoro Street, which is told, serve the best seafood in town. It does! Haha, the struggle in bad traffic on the way to Apong Restaurant definitely paid off. The seafood was fresh and tastily cooked with romantic spices. What an excellent menu!

It was a great lunch with great menu and great company. Then, we were ready to start our road trip long way up to Palopo City.
First stop was Maros District which is around an hour from downtown Makassar. Maros area is stunning with Karst stands reaching the sky on our left side while we drove further into Maros District. Maros is one of two the largest karst in the world, the other one is in Guilin – China and it’s been told that the karst was a primeval deep ocean, back to million years ago. 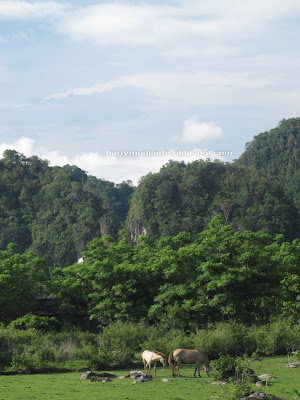 In the center of karst area, there is primeval cave, called Leang-leang (Leang Petta Kere). Leang-leang placed in some niche on the cliff, about 10 meters from the ground. It was found by The Dutch in around 1950 and estimated to be made in around 3000 to 5000 BC. The cave is painted with couple of red paintings, like wild boar (representing a good luck in hunting), 5-finger handprints (representing a repellent against bad luck) and 4-finger handprints (representing condolences for the dead). It is told that the red color of the painting come from the mixture of red dirt and betel leafs, which is chewed and spitted. 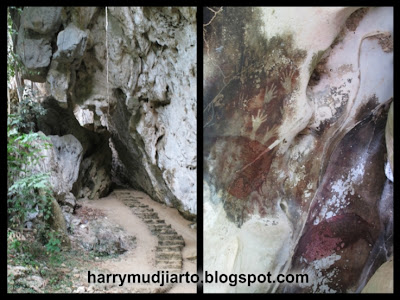 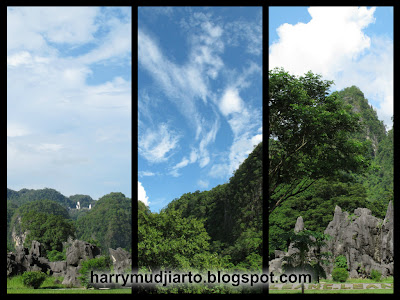 Info:
The painting is surrounded by locked fence. So, we need to ask the guard to open it and guide us climbing up to the painting and gave the guard for thousands rupiah apart from the entrance fee IDR 10.000,-.

Our next destination was Bantimurung Park with its famous waterfall and butterfly breeding area, but unfortunately we had to skip it because it was already closed when we drove out from Leang-leang. Thanks to our guide in Leang-Leang; he told us the alternative destination called Ramang-ramang. Just about couples of kilometer from Leang-leang, we stood in front of a stunning view in Ramang-ramang. Rice field ornamented with black stone under magnificent karst embraces. Ramang-ramang in local language means silent place and yes it was, just before the twilight and fog started to appear, making the place so peaceful with mystical view. It was like a fairy land and the environment was comforting the soul. 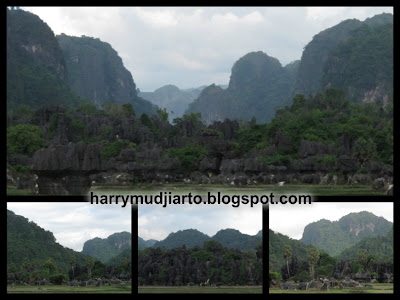 The situation was so comfy just to sit and did nothing, but yes we had to go back to the road and continued the road trip. It felt so good to be back in some road trips with my buddies. We had done some road trips together back in Java. Definitely this road trip brought back our memory and the memory became a great conversation among us. Phase one of this road trip took us 10 hours to reach Palopo City before continuing to Tana Toraja and back again.

Touchdown Palopo City at 3 in the morning, we directly checked in to Hotel Mulai Indah in Mangga Street (was known as Guttu Patalo Street) and slept there for couple hours before continuing our journey to Tana Toraja.
The hotel is located near public bus terminal (less than 500 meters) and looks like a narrow hotel from the front, but quite big in the middle and the back. This 1-star hotel offers big rooms at an affordable rate around IDR 300.000,- per night included buffet breakfast for two.

Woke up at 7 in the morning, we already stood by in breakfast room haha! Per our request, the hotel’s chef cooked some Palopo’s signature dishes called kapurung and lawa. Those two dishes are to die for, so rich of flavor and consist of healthy ingredients.
Kapurung is a soup, consist of chicken, peanut, long beans, corn (and couple of other vegetables) and congee sago. It tastes so delicious with sour of lime, salty from coconut milk, and all tasty ingredients.
Lawa is a steamed kale (ipomoea aquatica) with coconut and shrimps. It tasted light salty yet an addictive food. 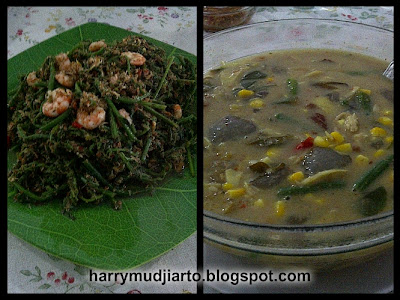 Info:
Not all kapurung and lawa in the market taste good.

The road trip was continued. On the way through the downtown of Palopo, we passed a unique house which was covered (almost for entire the front wing) by dead branches and also a car parked in front of the house, ornamented with branches. The story behind this unique house and car is the owner who’s famous as an eccentric person, thought that dead branches still have benefits for interior ornament instead of just being garbage. Well at some point, I had to applause to this man.

So long Palopo and hello Toraja!

Tana Toraja - Land of The Dead

We spent 2 days one night in Tana Toraja then back to Palopo again and hit it by the afternoon. Lovely afternoon yet the weather was so hot, we spent this afternoon to drive around the downtown of this little town.
Seafood was our first choice to close our journey in Palopo. Just beside the city dock, there were many tents served seafood dishes and for sure the ingredients were so fresh because the tents were literally beside the sea water (the water is just about a meter far from our tent).
The food was good and some was so great but the views were breath taking. The view where I sat was the city of Palopo in mountains embraces with the fog at the top of mountains, while behind me was the Bone Sea view in sunset. Yes Palopo is a small city, located between the mountains and Bone Sea. 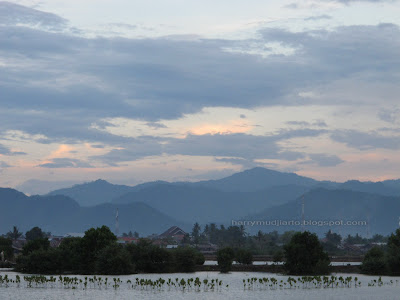 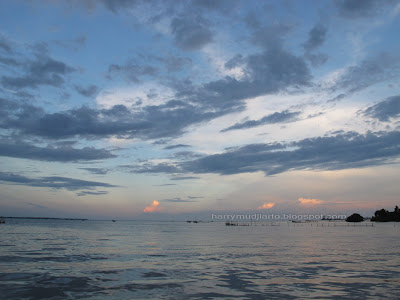 Our dessert was sarabba which is a signature beverage of Makassar. Drove back to the downtown of Palopo, we stopped at sarabba depot. Sarabba is a hot beverage consist of coconut milk, cow milk, ginger, lemongrass, pepper and egg yolk. Sarabba has a good taste and will recharge your energy and relieve cough. Usually, sarabba is served with fried cassava as the snack in thick brown sauce, so yummy. 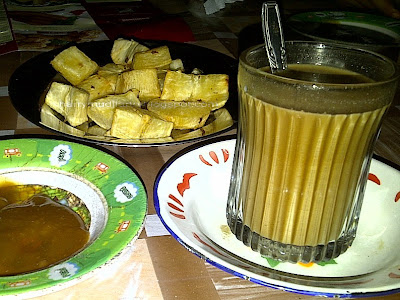 The night came, the moon said hi while the stars blinking and we had to leave Palopo back to Makassar. An executive bus with its comfy seats for IDR 155.000,-/pax was ready taking us for 7 to 8-hour drive to Makassar.

Info:
By the time when the bus driver assistant yelling our destination, we had to yell back saying “ADA” (means “we want to stop”) or the bus would continue without stopping at all.

First thing first was having breakfast. We dediced to choose one of Makassar signature dishes, called Coto in Gagak Street. Coto is a beef stew served in small bowl with rice cake called buras. It is so tasty yet cheap. 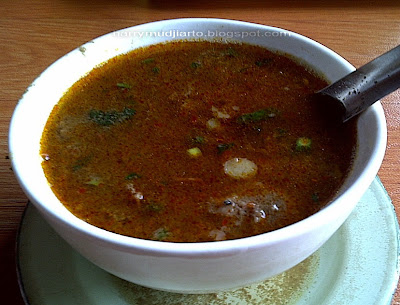 Next stop was Sunday Market. The environment of the market was so cool. There were hundreds of tent selling everything that we could imagine. They sell daily needs, culinary to pet haha. 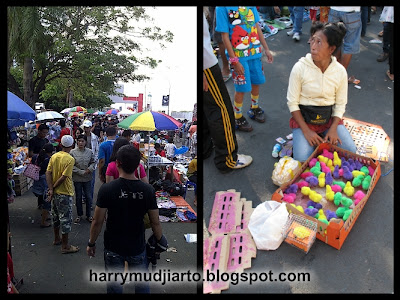 Done visiting Makassar’s landmarks in our early journey, we went to couples more which were not quite popular among tourists:
Fish Market Paotere (means mooring in local language) watching its daily activities. So interesting, with hundreds kind of fish being sold, (unfortunately) including babies shark with no fins, what a tragic. 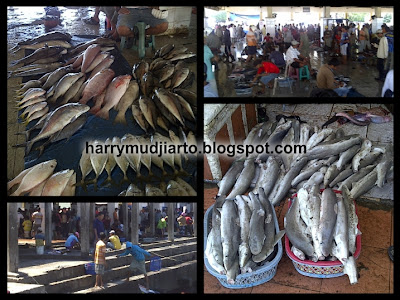 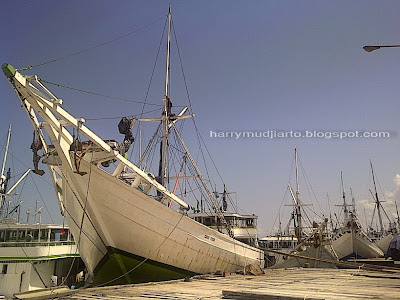 Sulawesi Street is a must destination, especially for us (Indonesians) to buy markisa extract (kind of syrup) and other authentic snacks from Makassar.
Mie Titi is another Makassar signature dish which was our menu for lunch. Mie Titi is a portion of crispy small noodles with thick gravy and chopped vegetables and meat (chicken, beef or pork), so damn yummy. 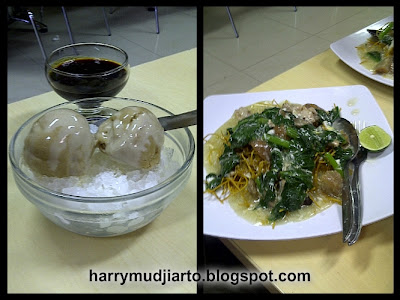 Somba Opu Fort was our last destination in Makassar. The fort still buried and only small pieces of them are shown. There were many traditional ethnic houses of Sulawesi shown, but unfortunately in bad condition and maintenance.

Long weekend which was started with smile, run so smooth and well completed. Indeed, it was a fun long weekend! Here I stood again in Hasanuddin International Airport taking a last glance of Makassar and smiled realizing those pictures in my digital camera could not entirely paint the moments I got, but for sure I would not easily forget all the moments till my end. 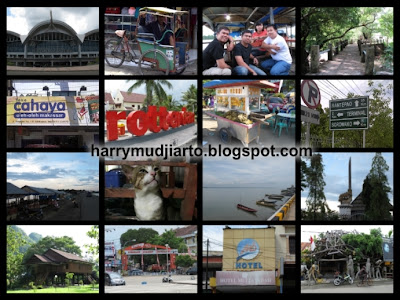 Thanks to Hotel Mulia Indah – Palopo for the hospitality.
Thanks to my buddies who made this journey awesome.

Special thanks to Resviana and AT for my English translation review
Posted by harry mdj at 9:28 PM