BELITUNG (or local will pronounce and text it as BELITONG) is one of Indonesian islands which has many beautiful white sand beaches and is unique for many natural abstract granite boulders. Belitung has become a popular destination, especially when one of Indonesian best seller movies took scenes there, based on a best seller novel, called Laskar Pelangi (Rainbow Troops).

Belitung is part of Bangka Belitung Provence which consists of 2 big islands (Bangka and Belitung) which are surrounded with dozens of tiny islands/granite islands. Bangka can be reached by a ferry daily from Belitung. Belitung is a pretty small island which took only about 2 hour from west to east coast.

My journey to Belitung started couple months ago when I decided to join this trip with JJ Narsis (a great deal package). Yes, I did not travel independently this time. Belitung is not quite friendly for independent traveler, because there’s no public transportation. YES! NO public transportation. So, you have to rent a car (start in about IDR 500k including driver and fuel), a motor cycle (about IDR 50.000,-/day) or like I did, joined to a local tour.


Day One
(7.30 am) Our plane just landed safely in Hanandjoeddin Airport of Belitung. A small airport located about 20 minutes to downtown of Tanjung Pandan District.

First stop was Hotel Martani which is located in downtown area of Tanjung Pandan District. A pretty wide old hotel which unfortunately has less maintenance, clean enough, very cheap (it only costs IDR 143.000,- including breakfast for two persons for economy class with air conditioner and personal bathroom in pretty wide room), and serving very good buffet breakfast in their class. 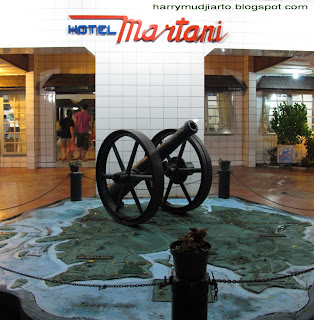 Done with check-in, we went to our next stop, A-Ke coffee shop which is located nearby the Tanjung Pandan Square (with big meteor stone replica as the center of the square), behind many shops surrounding the square (so yeah, it will be a little bit difficult to find, but trust me it’s worth it!).

Personally, A-Ke Coffee Shop is my culinary Belitung’s Highlight so far. The coffee shop has been around since (at least) 1922. The 4th generation running the coffee shop right now do not know the exactly which year the coffee shop was founded. The oldest bill ever found was dated in year 1922. A-Ke coffee shop is still using the same shop, kettles and water pot from the 1st generation, which are (more than) 100 years old! They serve ice/hot milk coffee, ice/hot milk tea and some raw boiled eggs in the morning (so yummy and fresh with pepper and soy sauce). The ice milk coffee and ice milk tea are very good and becoming my favorite since day one I visited this coffee shop (me and my friends came here once a day during our visit in Belitung).

The journey continued to SD Laskar Pelangi (a movie scene building of elementary school for Rainbow Troops movie). Well, it was pretty beautiful from afar, but it was in so bad condition when you walked into the building. 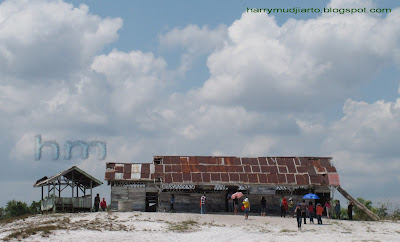 About couple of minutes from SD Laskar Pelangi, we stopped by at Bendungan Pice (Pice Dam). The name Pice is based on the name of the dam’s founder, Peter, which was so difficult to spell by locals at that time and became Pice (try spell Peter in Singlish haha). 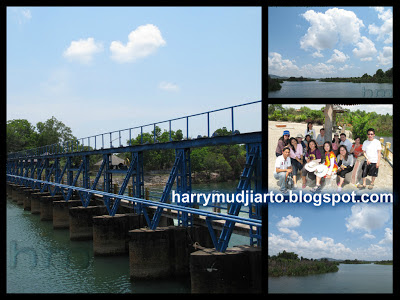 We got a lunch box in Bukit Samak before exploring many beaches around East Cost of Belitung.

Nyiur Melambai Beach is just okay for me, it's not WOW, yet not bad. 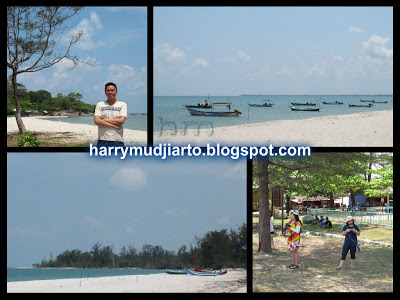 Tambak Beach is a new beach open for public, so the beach was almost empty with pretty wide and natural beach. Actually, even the locals are still confused about the direction to this beach, so we were kinda little bit lost before reaching the beach. 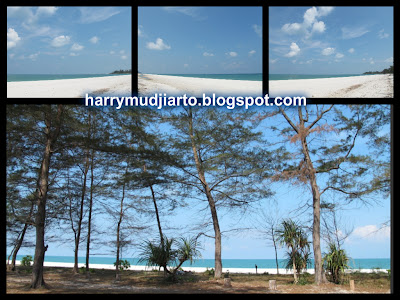 Bukit Batu Beach is pretty stunning with many granite boulders scattered around the beach. We also stopped in Avalokitesvara (Guanshiyin Pusa) Temple. A pretty small temple located in hillside nearby the beach. Some of us had enough time for praying, including me. There are 3 major places for worship inside the temple. The main places for worship for sure is dedicated to Avalokitesvara Bodhisatva (Guanshiyin Pusa) then followed by Buddha Gotama and some God/dess that we couldn’t recognize. 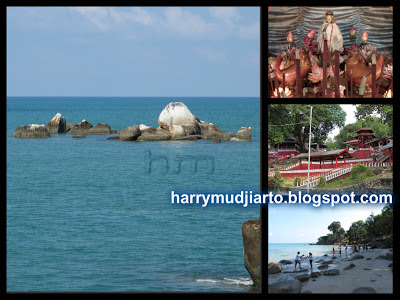 Burung Mandi Beach is one of the famous beaches among locals, especially people who live in east coast area. Well, not surprising that we found the beach full of visitors (during long weekend) with many shops and tents selling many traditional snacks, seafood cuisine and a lot of beverages from cans to fresh coconuts. The name of Burung Mandi Beach means bathing bird. Birds such as Pelican which is told used to live in the area, but unfortunately can’t be found these days, because locals hunt the birds.

Back to hotel for quick refreshment, then went to some local restaurant to have dinner and also got some snack (pempek/empek-empek) across the restaurant which is some hang out center among locals who live in Tanjung Pandan District. The place is very close to a beach (have no idea about the name of the beach). There are many restaurants and Odong for rent. What is Odong? I can’t describe it but Odong is like this. 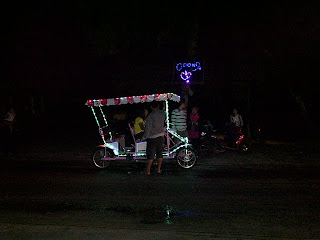 On the way back to hotel, our group stopped in some local shop selling many local snacks for take away as gifts or self consumption.

Day Two
The second day would be full with many white sands beaches and islands hopping. The first stop was Tanjung Tinggi Beach, which is one of the famous landmarks in Belitung, and is popular also by Laskar Pelangi movie (Rainbow Troops), where they took some main scenes of the movie in this beach.

Tanjung Tinggi Beach is located in North Belitung and absolutely, definitely, for sure (what else? Haha) is stunning beach with hundreds thousands of granite boulders scattered around the beach from the pretty tiny sizes to the massive one. What an artistic art made by nature, I do love it and thank God, He let me see this before I die. 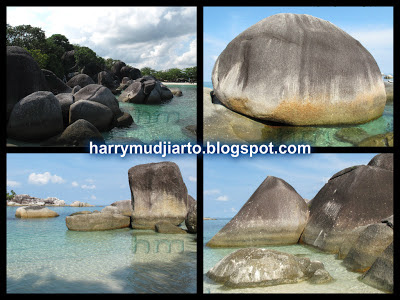 The second stop was Tanjung Kelayang Beach which is also kind of the port for islands hopping activities, snorkeling and diving. Life Vest in, and we were ready to jump in to the boat and continued our trip in a single motor wood boat. 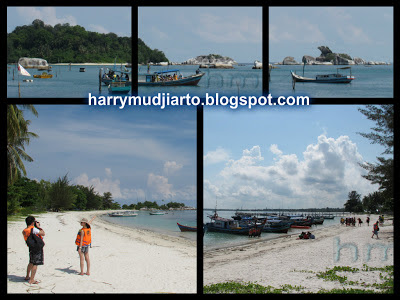 Next destination was Burung Island which has a pretty long beach, quite clean and comfy for relaxing swimming. From the right side of the beach, we could see a tiny island consist of granite boulders shaped like a bird’s head. 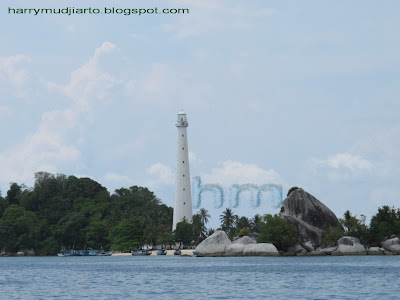 The islands hopping continued to Lengkuas Island which has a lighthouse, built in about 1918 by The Dutch. Lengkuas Island was so crowded with visitors, because every boat stopped by at this island for lunch break and exploring the lighthouse which has about 18 levels inside. Lengkuas Island is not a big island but it has many beautiful spots (again) with many granite boulders scattered in some spots of the beach and it also has cemetery for john doe boat crash’s victims. 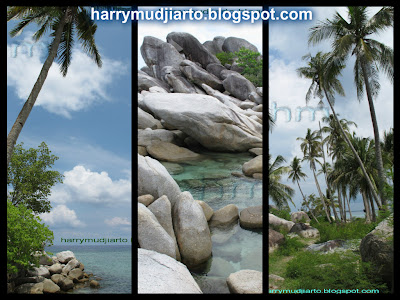 Sailed about hundreds meter from Lengkuas Island, we did snorkeling and actually that was my first time, haha! Terrified enough because we snorkeled in some high seas with about 7 meters depth and I can’t swim at all. The flow was pretty strong so I decided to snorkel very close to the boat haha. It was quite quick but full of fun, still not a big fan of snorkeling though.

The next island was Babi Kecil Island which has a pretty wide shallow sea. So, for those who can’t swim well or at all, like me, this island is very friendly haha.

Back to Tanjung Kelayang Beach we spent an hour to do some refreshment and snack break before continued to our last destination for the second day which was Tanjung Binga Port for chasing the sunset. Unfortunately, we had to skip it because rain fell down, hiks. So, instead of chasing the sunset, we directly went back to the hotel for refreshment before dinner. 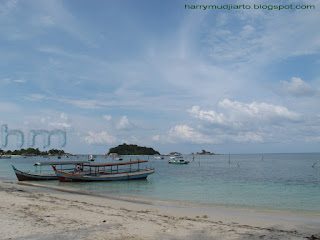 I (and some friends) decided to have some ice milk coffee by A-Ke before dinner, which is located nearby the hotel. We just walked about 15 minutes from hotel, passing by The Meteor Square. Ah, what a perfect evening with perfect ice milk coffee to close a perfect day.

After got a wonderful dinner with grilled beef rib, our group stopped by in a souvenir shop, spent some time for our group to buy some souvenirs from Belitung. One of the famous souvenirs is meteor black stone and beside it will move like a “dance” when touched by our nail, I don’t know what it is used for.

Back to the hotel the night was still so young. It was not only 9 pm, so we decided to walk around the hotel with no purpose. About 5 minutes walk from hotel we noticed a tent selling “Mie Pampi” which is one of famous street foods among locals and yes, indeed, we decided to order some haha. Mie Pampi is like a rice noodle with pretty big diameter (about 3mm) but not like an ordinary noodles which is served long, the pampi noodles is served in short cuts (the longest cut is only about 4cm long). It can be cooked in stir fried and in a soup. The taste of mie pampi was not bad (for me).

Day Three
Last day in Belitung (hiks) started with another session in A-Ke coffee shop before we all went to and try the authentic dish of Belitung, called Mie Belitung. Mie Belitung consist of boiled ordinary yellow noodles, with some slices of tofu and flour cake (called bakwan) then served in shrimp thick sauce. It is a light meal, but yet tasty.

Next destination was Ethnic House of Belitung, which is interesting, but less information about what we saw. 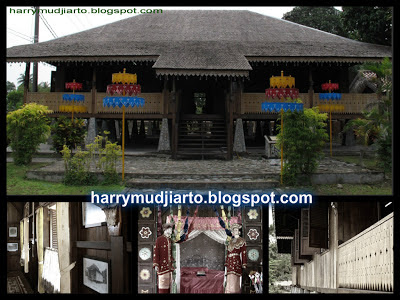 Kaolin Lake was our next destination in our last day in Belitung. Kaolin Lake was told a former mining of tin, but already abandoned after the exploitation (I guess). The lake pretty looks like Kawah Putih (White Crater in Ciwidey Bandung) with its white blue in light green water.

So Long Belitung
Our last destination in Belitung was (back to) Hanandjoeddin Airport and like it or not, we had to close this vacation and got ready to fly back to Jakarta.

Three days of long weekend, indeed, well spent. What a great destination with awesome fellas. Full of many beautiful beaches, many stunning spots, awesome granite boulders, “reunion” with old friends, met new friends, and many great memories. It was a wonderful weekend getaway! 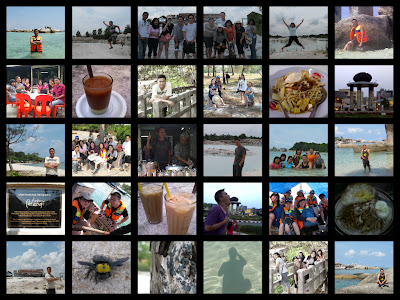 TIPS:
Sun block with high spv is so recommended from face to toe haha and keep re-put every hour. I forgot to put sun block in my legs and yes, it got burnt, hiks.

We can find many of small to huge starfishes in those beaches, but we have to be careful when we want to put them out of the water and make some pictures of it. We must often put it back in the water otherwise it will die.

My concern about Belitung is that it should have some public transportation and keep the city green, because the city looks so arid. Many stunning beaches need (some in seriously condition) to be looked after and maintained about their cleanliness and maintenance. 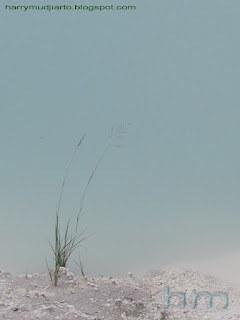 Special thanks to Resviana for my English translation review
Posted by harry mdj at 8:49 PM

New comments are not allowed.