Green Canyon - Pangandaran: One of The Hidden Paradise in Indonesia (English Version) 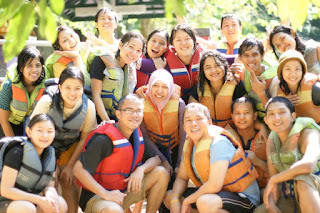 Friday, 25th November 2011, at 7 pm, twelve of us already stood by in front of main gate of Mediterania Apartement and started looking for seats inside the bus of JJS Tour & Travel which would take us to Green Canyon – Pangandaran shortly. This time we had deciced to join Group Tour for visiting Green Canyon which was organized by disdus.com in cooperation with JJS Tour & Travel. The price was quite cheap (promo package) at Rp 507.000,- per pax, inclusive 5x meals, water 600ml per day and admissions (excluded tips amounting Rp 20.000,- per participant. The tips are for 2 pax of tour leaders and 2 pax of bus drivers).
Had imagined that this trip would be joined by other groups (we take non private tour), we had completely understood that this trip would not be as flexible as when we did it privately, but it came to our shock when we were informed of total participants for this trip were of 59 participants. We had expected that total participants would not exceed 30 participants. Well, I guess the promo price had made this trip package sold out pretty well.
The bus itself looked pretty good from outside, clean inside with full air conditioner and 2 LCDs for entertainment, but this bus was a bus having 65 pessanger seats, and certainly causing a very narrow space between each chair (it’s only about 6 inches on front rows and 8 inches on back rows in 2 coloums (3 seats, aisle less than 20 inches wide, and 2 seats). I think that kind of bus is not comfortable for such a long trip taking about ten hours to Green Canyon (inclusive 3x stop for short break). Some participants talked around sarcastic joke that the bus looked like an economy air conditioner public bus. 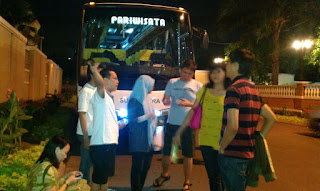 Waited for departure time which is at 8 pm, all participants were quite busy with their own activities, like buying snacks in nearby mini market, having dinner (dinner on day 1 is not included), changing their clothes (some of participats come directly from their office) or just sitting around the bus having a little chit chat with others.
Almost 8 pm, the tour leader asked us to get inside the bus and the participants started complaining the narrow space between each chair, including the tiny paticipants hehehe, but the show must go on. In uncomfortable sitting position, we finally were on our way to Green Canyon smoothly passing Jakarta’s traffic on Friday night with music from Michael Learns To Rock to local oldies classic band named The Panbers.
Stopped in high way’s rest area KM57 and somewhere after, for a quick break then arrived in a big Mosque somewhere around Pangandaran area for praying time for Moslem participants before reaching Green Canyon area in parking lot with 20 toilets for rent (Rp 2.000,- per person) for quick refreshment.
After quick refreshment, the tour leaders directed us to a simple tent restaurant across the parking lot for breakfast. It’s a typical West Java breakfast menu called Nasi Uduk (steamed rice with coconut milk) with scrambled egg and fried rice noodles and chips. Done with our meal, some of us had to change our clothes into t-shirts and short pants and ready to get wet exploring Green Canyon.
It is not recommended to bring your gadgets to Green Canyon unless the gadgets are waterproof, because we will get totally wet to reach the finish point of body rafting track at Green Canyon. Pity, none of us in my group brought waterproof camera, so we couldn’t take a picture inside Green Canyon. Some friends told me to cover our camera in plastic but for me it’s too risky and I was not dare to do so.
The departure quay to Green Canyon is nearby the restaurant, about 100 to 150 meter walking. The adventure began with a big single motor cano with canopy for 6 passengers, 1 sailor and 1 guide. Life vest is provided and mandatory to wear it during body rafing activities even for a good swimmer. The cano will take us to start point of body rafting at Green Canyon by the river. The river is pretty wide and you can see many trees and bush in each of the banks, making the vibe totally green as its name. Some friends told me that we should not come during monsoon. The green will turn into brown because of the mud. 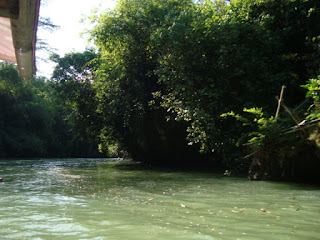 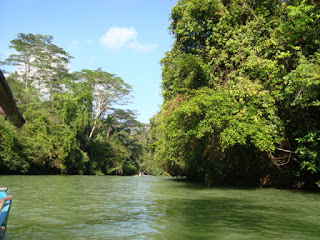 Took about 20-25 minutes through the river by cano until we could see the rock and dirt cliffs surrounding the river and finally we arrived at start point of body rafting. The cliffs stand so high above us like a skycrapper with roof of trees and mild cool water drops like a thousand waterfalls, well in some point it looks rain. Carefully stepped down from cano to a giant rock in the middle of strong flowing river, we were redy to get wet with bare feet (highly recommended not to wear any sandals or shoes).
Lifevest – checked and we were ready to jump into the river and started to pull us forward by a provided rope. In some point we had to swim or hold us against the rock in river side but in some point we had to pull ourselves forward by rope again, held by our guide.
Eventhough this track for beginners, it’s indeed quite hard for us and made us loose our breath in some point. Watch out for the strong flows which could drift your short away hahaha, it almost happened to some of us. It took about 1 to 1.5 hours before we reached the finish point of this beginner track. 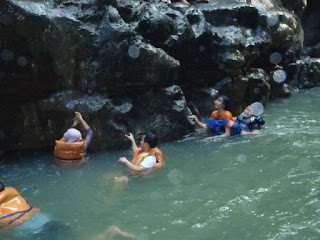 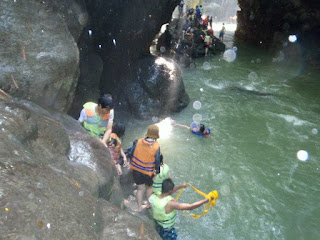 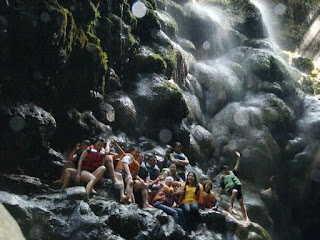 For a while we just sit in the giant stone in the side of the river and enjoying the view and the vibe. It’s breath taking and mesmerized. The water falling in thousand drops with the spark of the zamrud colors of the river and thousands leaf, it’s like almost a fairyland.
I’d like to spend hours in this place but we had to move back because the visitors kept coming and the space was not available for many.
We’re informed by our guide that the finish line of the Green Canyon was far from our finish point but the track was too hard and just for advanced body rafter. The finish line would reach some of cave or some kind like nature tunnel.
Moving back to start point we didn’t have to swim or pulled forward by rope or hold against the rock, we just had to do nothing and the river would float us back. It’s fun especially when making a straight line between us and floating like a snake. Well, we chose floating with style hahaha. It took about no more than 15 minutes to reach the rock which was also the start point of the body rafting. Please be aware of your feet because it could crash with the rocks deep in the river.
Going back to the arrival quay (also as departure quay) we had to stop by in some kind like interchange quay. After reaching the finish point of the body rafting, we jumped in to a cano with no canopy with other group then the cano took us to interchange quay, then we continued with the same cano which took us to the start point of the body rafting. Why? Because the cano would wait for us in the interchange quay due to limited space in the start point of the body rafting and it could be one or more of members of your group got split and you couldn’t wait in the start point because of visitors keep coming while the space of the rock is very limited. You can meet your separated fellas later on at the interchange quay. 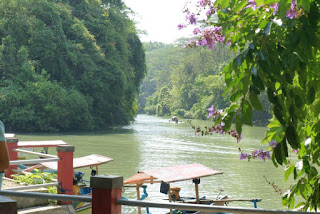 Some information about the cost of the cano rent it we go to Gren Canyon personally:
Cano for 6 passenger will be charged for Rp 75.000,- (return) and Rp 150.000,- for 1 guide. We can go to Green Canyon without a guide because guide will provide you a rope and direct us to the finish line. It’s not recommended to jump into the river without a guide because in some point in the river’s flow is strong and pretty dangerous. Some guys in Batuhiu Beach told us that some visitors got lost and the body couldn’t be found because of their alleged irresponsible act in the river. Some parts in the river have strong flows in depth and the flows could reach meters.
Arrived at the arrival quay, we were back to the parking lot, then some of us took a bath in rent toilet while some of us just let the sun dry our clothes because the river is a plain water river while the rent toilet supplies brackish water and makes the skin dry en sticky.
It wasn’t lunch time yet when we went back to tent restaurant (the same restaurant that we had breakfast in the morning) for enjoying our lunch. Well, we were starving after the body rafting activity. The lunch’s menu was seafood with grilled fish, sweet sour squid and stirred fried vegetables with chips. You can also order a fresh young coconut as your beverage or dessert for Rp 8.000,- each (exclude for the tour package).
After lunch, our journey continued to Batukaras Beach, it’s about 45 minutes by bus from Green Canyon. The beach is inside the gulf with dark sand with many hucksters surround the beach. You can rent a surf board (half surf board cost Rp 10.000,-), a traditional mat for Rp 10.000,- without limitation time or just try the local culinary (It’s not of good taste tough). Well, generally, I wouldn’t recommend this beach for a personal/solo visit, because it wasn’t that interesting for me (I’m not a huge fan of beach after all, so it has to be a good beach to get me interested). 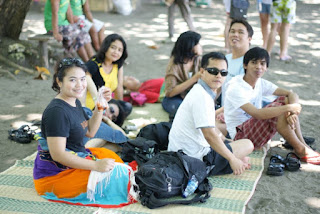 Next stop is Batuhiu Beach (we also stayed over in a local hostel around this area), it’s about 1 to 1.5 hours from Batukaras Beach by bus. Batuhiu Beach has its name, because in the past they had a rock in the middle of the beach looking like a shark jumping out of the wave but now because of erosion, the rock is just like an ordinary rock. Batuhiu Beach is definitely better than Batukaras Beach because it’s located not in gulf, still with dark sand but have a bigger wave and has kind of a mini hill where we can climb easily with many of trees to watch an ordinary sunset (the sunset is not spectacular as in Tanah Lot -  Bali for instance). Another attraction in this area is a small Sea Turtle Conservation which has free admission but you can always give some donation in some donation boxes provided nearby the gate. 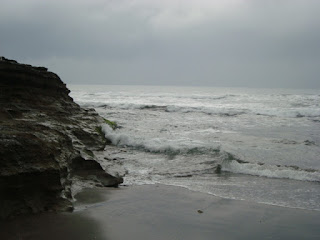 After sunset, we just checked in to local hostel and took a rest for whole evening because there’s no event presented by tour and there’s nothing to do for activities in this small area. Our hostel is quite simple in hostel way with only a fan provided inside the room with hard pillows. The good thing in this hostel is the plain refreshing mild cool water.
Woke up in the morning we were kind of being invaded by frog babies hahaha. We had no idea where the frog babies came from. They were jumping around the back yard into our room, living room and bathroom. It’s quite funny that we did our morning activities by avoiding crash them down.
At 9 am we were ready to go back to Jakarta for 10 hours again inside the bus. Well, it was a short vacation, but definitely worth it, especially The Green Canyon. It’s my high recommendation to visit there. It is totally one of the hidden paradises in Indonesia.
Special thanks to Resviana for my English translation review
Posted by harry mdj at 8:43 PM